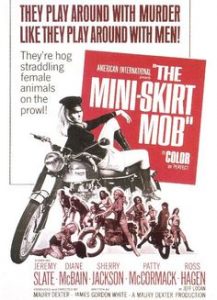 The Mini-Skirt Mob – sounds like the coolest girl punk band you ain’t heard of, or just another AIP biker movie. It’s the latter. This isn’t that terrible, one guesses. No, it’s knowable: this is a gosh-darn B-movie if I ever saw one. Why the gosh-darn? The movie deserves one: it’s a western in biker-movie skins, and it shows a sign, oddly enough, of where its director Maury Dexter would be headed a year or so later when he made a very good low-level-action biker movie called Hell’s Belles.

It’s set mostly out in the desert, where the leader of the Mini-Skirt Mob, the bossy Shayne (Diane McBain rockin the hard-to-frazzle blonde-top look), is after a former cowboy who left her to settle down and marry with an ordinary girl. She and the gang and some other rodeo-party-down type guys (such as Ross Hagen and Harry Dean Stanton) basically chase after these guys till they strand them in the desert, rip their tires, and force a stand-off… a long one, that’ll need some beer, and relationship drama!

There’s some time during the movie where the writer tries to make this less about the bikes and more about the characters, and this is where things get a little shaky. Sometimes it’s just plain hysterical trying to see these guys emote, or try to have any kind of connection. The fact is what makes the movie so entertaining is that practically everyone, even the two leads (and especially that little lady) are just stupid. Shayne might just be sadistic or mean, but there’s still a level of not knowing all where its at and is only a minimal bad-ass. The keeper though is Harry Dean, always dependable in a fix for a supporting role, who is a “dumb redneck” among the group, but also isn’t much in the way of being a killer. He just wants to hang out and party, and that’s where the other girls in the ‘Mob’ want to be at. You’d think they’d go off and have crimes or party down. Nope. Have a chick as the leader, bound to have some man-drama.

If you like a biker movie way past your bedtime, you could do worse than this. Its action isn’t staged too well and the acting by the two leads (Slate and Jackson) is so stiff you can feel the strain in trying to make an argument scene look halfway convincing, but some laugh out loud moments are to be had, like when we see a shot of the bikers arguing about something and a pan of the camera shows boy-scouts hearing their every word! Goodness! This is actually fairly safe stuff, nothing too dangerous actually in the way of much violence and sex…. actually, I take that back, there is one semi-awesome explosion, a couple of awesome cheesy deaths by incredible launch-off-bike, and a person runs out on fire! Nothing exciting, but its… what it is