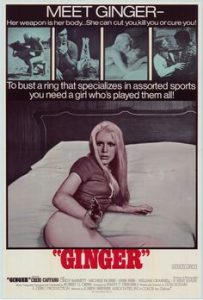 This film is the first of a 3-film series, and is the worst of the 3, mainly because the other two films have the benefit of a higher budget due to profits from the first film.

In this series-opener, our hero Ginger, played by Cheri Caffaro (who won a Bridgett Bardot look-alike contest as a teenager) plays a private investigator who infiltrates a gang of women. As part of her initiation she fights the leader, with the loser being stripped naked and tied up on the beach. The rest of the movie follows pretty much the same theme: women finding one reason or another to get tied up nude and sometimes having sex.

One redeeming quality about this film is that its one of the few films to openly use bondage as a recurring event and still come away with a mainstream “R” rating in the US. This is because the film (and the series as a whole) has the benefit of being made in that window of time called the Sexual Liberation and before the feminists and Politically Correct enthusiasts got ahold of the movie industry and theatres. In fact, the “Ginger” series might have disappeared all together had it not been for three simple technological inventions: the VCR, the home computer, and the Internet. Now, like-minded individuals can get together and express their common interests, including mainstream “B” movie bondage/adventure films.

Collectors will want to get all three films, but those on a budget will probably just want the second film (“The Abductors”) and the third film (“Girls Are For Loving”).