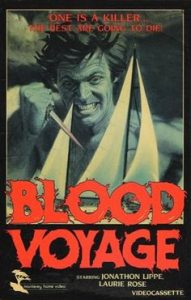 What is meant to be a pleasure cruise becomes a nightmare as murder follows murder on a small ship.

With tension mounting, passengers and the crew turn on each other in a desperate attempt to identify the killer.

There’s a good dose of hot chick nudity or bikini sprinkled throughout in fact. And don’t miss the Asian girl licking a hot dog and then putting it back on the platter! Huh?

The film takes its time to get going. It sort of reminded me of I Spit on your Grave in the sense that it builds the suspense and you know something is going to happen.

Only not very much really happens! The problem with the movie is that it’s done more like a mystery movie than a slasher film. But the last 10 minutes are hysterical!

Interestingly the guy who directed this was a one shot director, but he had been an actor in Hollywood since 1920!