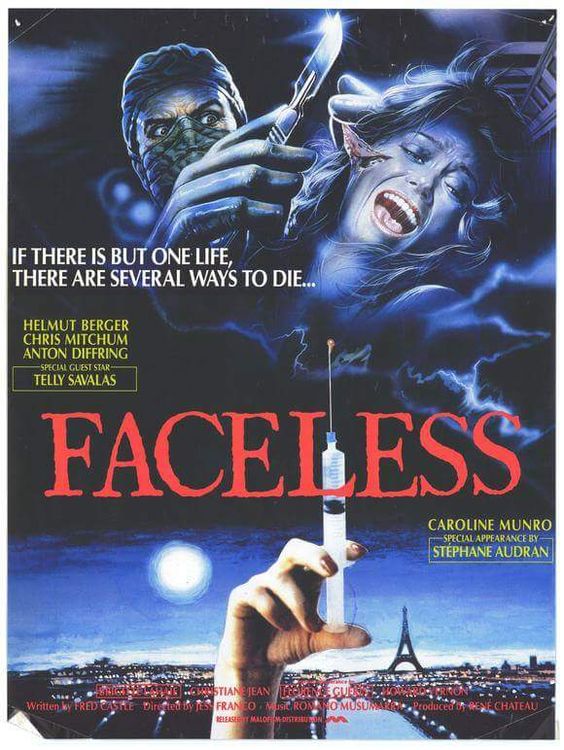 The renowned plastic surgeon Dr. Frank Flamand (Helmut Berger) owns the Clinique des Mimosas in Saint Cloud. While shopping in Paris during Christmas with his beloved sister Ingrid Flamand (Christiane Jean) and his lover and the head of the clinic Nathalie (Brigitte Lahaie), Dr. Frank is attacked with acid by a client that had her face partially destroyed by him in a unsuccessful operation. However, he sidesteps to the acid attack and the face of his sister Ingrid is totally deformed. Dr. Frank becomes obsessed to restore Ingrid’s face and together with Nathalie and their dumb and retarded servant Gordon (Gérard Zalcberg), they kidnap beautiful women and Dr. Frank kills them expecting to prepare a solution to recover the beauty of his sister. When the addicted model Barbara Hallen (Caroline Munro) is kidnapped by Nathalie, her wealthy father Terry Hallen (Telly Savalas) hires the tough private eyes and his friend Sam Morgan (Chris Mitchum) in the United States of America and sends him to France. Meanwhile Dr. Frank summons the Nazi Dr. Karl Heinz Moser (Anton Diffring) that was well succeeded in sadistic experiments implanting faces in scarred pilots. Sam snoops the clinic and discloses the dark secret of the place.

“Faceless” has the same storyline of 1960 “Eyes without a Face” by Georges Franju but revisited by Jesus Franco, with his usual bizarre situations and characters, with kink sex, rape, lesbianism, beautiful actresses and so on. The wooden face of the unconvincing Chris Mitchum is not well cast and the open conclusion is the weakest part of this film.