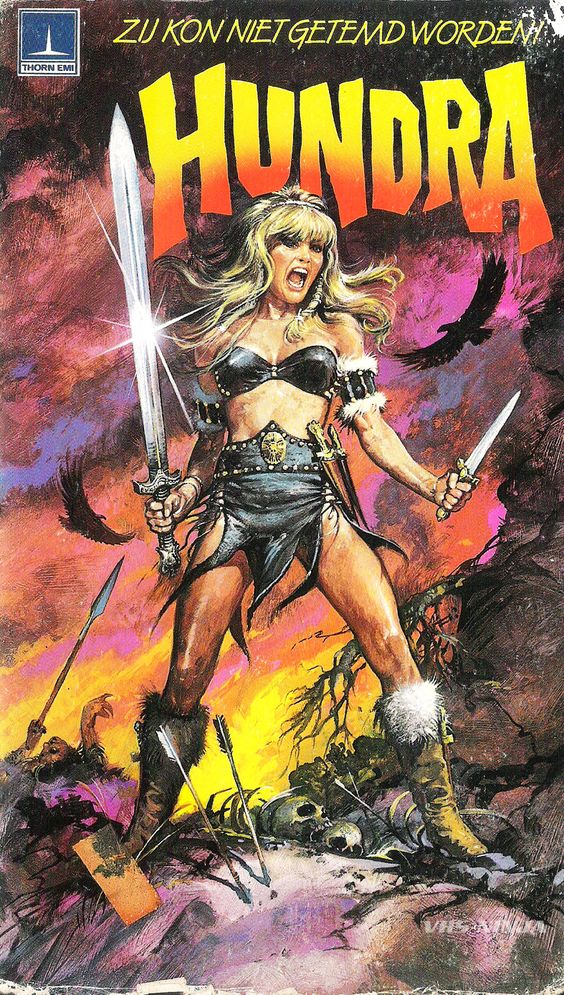 Sword-and-Sorcery epic with female lead taking on multiple adventures and fierce battles . Thrilling and stirring movie full of imagination and fantasy that introduces us a brave heroine , female counterpart to Conan , she leads a valiant tribe of women who dares to be free . This is a delightful action/adventure romp set in the Dark Ages , where savage and violent men enslave all women . There appears a valiant warrior woman , her name is Hundra (Laurene Landon) , a Red Sonja-alike , she was born in a tribe of fierce warrior women . Hundra is an archer and sword fighter , whose Amazon tribe was wiped by nasty Vikings in some scenes similarly shot to Conan film . Hundra is superior to any male , woman of beauty , a warrior of strength , a hunter of man . Hundra The Invincible finds her family slain and takes a vow of vendetta until one day she meets her match (Ramiro Oliveros) .

This exciting film packs noisy action , adventure, and rip-roaring fights . Dumb images , unintentionally hilarious and lots of amusement and entertainment . Made on a fairly middling scale with passable set design , glimmer photography and excellent musical score . This entertaining picture contains frenetic action , tension , bloody fights , and moving action scenes , including blood , gore and beheading . The film is full of freaks and bemusing situations ; it is quite entertaining because being a laborious and intriguing adventure tale with some unintentional humor . Sympathetic performance by Laurene Landon as Hundra the Invincible , a valiant woman who has been raised to despise the influence of men , she the finest warrior of her people . Laurene Landon executed almost all of her own stunts in the film , the only stunt she didn’t carry out was a backwards fall from a high tower . Agreeable support cast full of Spanish actors such as Maria Casal , Luis Lorenzo and Spaghetti usual as Eduardo Fajardo , Fernando Bilbao and Frank Braña . Although all the dialogue and dubbing for this movie proceeded by nice actors was looped in post-production . Colorful and evocative cinematography by John Cabrera . Very derivative special effects , acceptable production design and matte paintings . Impressive musical score composed and conducted by the master Ennio Morricone . The picture was shot in La Pedriza , Manzanares , Madrid , Texas Hollywood-Fort Bravo, Almeria , Spain and ¨Condor¨ fortress , where was filmed several Spaghetti/Paella Western as ¨ Blind man, Massacre at Fort Holman¨, ¨A man called Noon¨ , ¨El Condor¨ and ¨Conan the Barbarian¨ .

The motion picture was middlingly directed by Matt Cimber . He has directed all kind of genres , in the mid 70s did three immensely enjoyable blaxploitation pictures : The Black Six (1973) , Lady Cocoa (1975) and the terrifically trashy The Candy Tangerine Man (1975) . Matt made a rare foray into the horror genre with the disturbing psychological shocker The Witch Who Came from the Sea (1976) . His next work was based on a Mario Puzo story, a World War II drama A Time to die (1982) starring Rex Harrison and Rod Taylor . Later that year Matt teamed up with Pia Zadora for two films : the underrated Butterfly (1982 ) , Orson Welles last film , and the fun Fake-out (1982) . The following year Matt joined forces with actress Laurene Landon for Hundra (1983) and Yellow Hair & the Pecos Kid (1984) , both of them being shot in Spain with similar cast and technicians . The film will appeal to adventure buffs with enough action to make it worth looking in on . In other words , it seem likely Conan enthusiasts and juvenile viewers will be delighted because thrills, action and adventures are regularly presented and edited to offer the enough impact .