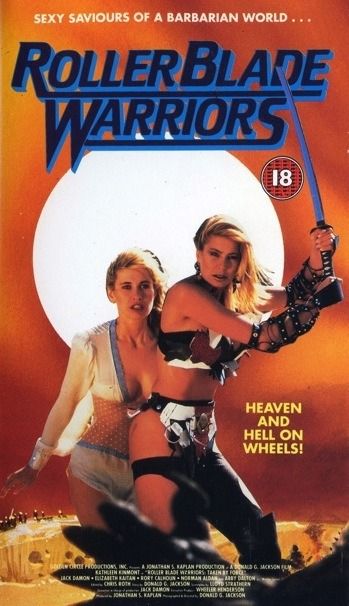 The story takes place in the indeterminate future, where the world as we know it resembles the Californian desert. A strange religion known as The Order of Rollerblade (I kid you not) is established to combat the seemingly endless supply of roaming vagabond mutants who fight for no obvious reason. Karin Krosse, our hero, is chosen to escort Gretchen Hope through the wasteland in order to bring peace throughout the land with her pleasant demeanor. Using her knowledge of swordplay and her excellent skills with roller skates, Karin Krosse must defend Ms. Hope and deliver her to the Rollerblade convent. What horrors await the pair as they travel through this nightmarish landscape?

Throughout the duration of the film, my friend and I could not determine whether or not the director of the film was intentionally being campy or serious in a bad way. Several of the scenes involving a particularly unrealistic green mutant beast were so unconvincing that we had to rewind the tape and laugh at it again. The acting was horrid, and the visual effects were on par with an early 70’s episode of Dr. Who. Some of the more comedic aspects of the film were the bizarre use of narration during the first part, and the inclusion of arbitrary freeze frames in several scenes. There is one scene where it is impossible to decipher what the actor is saying do to his incoherent mumbling.

For a low-budget movie, it has decent pacing and a fair amount to gratuitous nudity. Combine that with the shockingly bad production design, the blasphemous acting, unrealistic fight scenes, and of course insane story and you have one hell of a film. Highly recommended as a comedy, to be avoided if you are looking with a film with substance, plot or great visuals. This is one film you should watch with a group of friends, especially if you’ve been drinking.