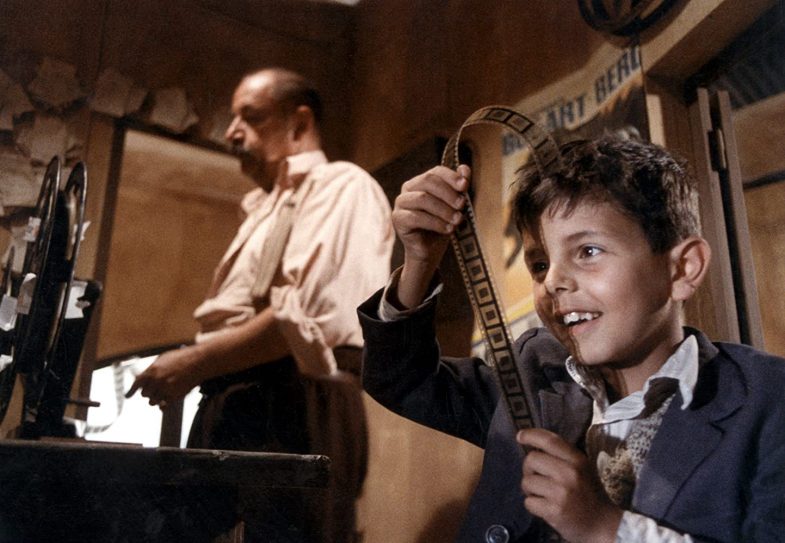 When I was in high school I would often volunteer my services to run a 16mm projector. It could either be running cartoons at a Christmas party or doing the Friday night movie screening at a local Children’s Hospital. There was something about projection with the Bell and Howell Filmosound that was mystical to me. Threading the projector, getting the loop correct, and then hearing the clack as the film movement started up, and pulled the frames down in front of the shutter and a glowing lamp. The idea that I could turn on this machine and turn 24 still images into a second of moving pictures was magical. There was something inherently spiritual about the process and the result.

As the film ran through the sprockets your ear would be attuned to some abnormality, a missing sprocket, a rough splice in order to react and react quickly if the showing would be impacted. With a bunching of film in the gate and the melting of a frame, you always had to be prepared to counter disaster. There was an artfulness to it. When I visited projection booths in commercial theaters, this point was driven home, a classic 35mm changeover process was a ballet of bells, a slow burn of a carbon arc, and the appearance of what we called the donut in the upper right corner. The classic union projectionist could do magic.

With the fire door still in place, the projectionist would often point to it and tell tales of when the studios released prints on nitrate stock. Every show had a margin of risk of the print bursting into flames and many a projectionist was injured in the process of entertaining an audience. The men behind the curtain were skilled craftsmen. They took deep pride in what they did and would have to engage in an apprenticeship which would take hundreds of hours in order to gain the skills to engage in this craft.

This is now for the most part all gone. In the State I live in there are two community-based theaters that maintain a 35mm changeover system, one of them of course being The Historic Artcraft Theatre where Steve Blair, the projectionist there every weekend, exhibits his art in a flow of cinematic dreams from days gone by. The archivists at the studios know when Steve gets a print from them for the most part it comes back in better shape. They acknowledge this by sending the best possible 35mm prints to him, tipping their hats to his skill and professionalism. You see, if you only have a 35mm platter system you do not get the rare prints from the studios, they know that platters stretch, twist, and abuse 35mm film.

I have been thinking for quite a while that something has happened to the heart of the business of motion picture exhibition, I cannot drill down on just one thing but one of the things that I believe changed the soul of this business in a radical way was the shift to platters and then the shift to digital. I believe it took something away and replaced it with a process that had little art of skill attached to it.

The Canadian educator, Marshall McLuhan stated that “The medium is the message” in his book “Understanding Media: The Extensions of Man”, published in 1964. McLuhan proposes that the communication medium itself, not the messages it carries, should be the primary focus of study. In a nutshell, McLuhan states that this means that the way that we send and receive information is more important than the information itself. Where we were once consumers, consuming information by watching television or listening to the radio, in the 21st century we have now also become producers, creating our own information as well. For example, after watching the latest episode of a television series, we can now instantly connect with anyone, anywhere in the world who also watched the presentation and communicate with them.

What is interesting is that digital technology, which most theaters were forced to embrace, has deeply changed the nature of moviegoing. By its nature digital is a process of give and take, we all use it and on a daily basis. Digital technology has become common and every day.

The human optic nerve is not a machine. Our retina is nothing like film or a digital sensor. Human vision is a cognitive process. We “see” with our brains, not our eyes.

Motion in the film is an optical illusion, a hack of the eye and the brain. Our ability to detect motion is the end result of complex sensory processing in the eye and certain regions in the brain. Until the imposition of digital, the way a movie was projected in movie theaters hadn’t changed much since the widespread acceptance of color and sound in the early 1930s. Due to technical and cost constraints, we had a standard: 24 frames per second, a three-bladed shutter, and some dreamy motion blur, all projected as shadow and light on the side of a wall. Until digital projection, we watched movies the way our great-grandparents did, it connects us with a shared ritual. There is something in 35mm projection that tells our brain, this is not real.

Much to my and many others regret, new digital display technologies have replaced film projection. New projectors facilitate higher frame rates. As frame rates increase, the messaging to our brains that the motion on the screen is an illusion will begin to break down. Moving pictures no longer appear as shadows and light on a flat wall and will begin to firmly place themselves into “the real world”.

This a new medium that pretends to be the next evolution from the movies, stories are told but in a radically new and different way. As digital resolution and frame rates increase, movies move away from the ability to have the audiences inject their own perception into them and maybe they cease being movies and become something else.

I miss the organic, chemical nature of the movies. A strip of 35mm or 16mm film was like a canvas, open to interpretation and to perception. Maybe a big problem with the movies is the fact that technology has effectively distanced them from us and until we can breach this chasm we will always remember what was.