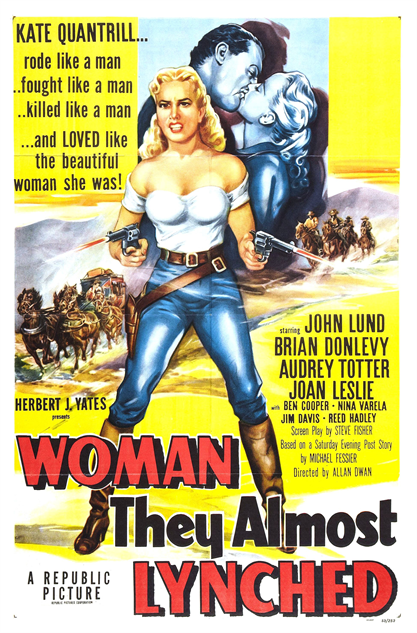 WOMAN THEY ALMOST LYNCHED (1953) opens with a bang and never lets up for its entire running time. I don’t think I’ve ever seen a Republic western as good as this one, packed with incident, filled with a great cast of performers, several of them playing famous outlaws, smoothly directed and expertly edited, and boasting an array of powerful female characters like you’ve never seen in one western before. I would say that Audrey Totter as bloodthirsty Kate Quantrill steals the show but then I’d be giving short shrift to Joan Leslie who more than holds her own against Totter right up to the end. The two characters start out as fierce antagonists who get into a shouting match at the scene of a massacre of Union soldiers and it only gets worse from there, descending into a spectacular barroom catfight and eventually into a gun duel on the town’s main street that doesn’t resolve things at all. It gets even more interesting as it goes along and we learn more about both women and watch as the anger subsides and they come to more than one level of understanding. Totter even gets to sing two lovely songs in the film, although I can’t confirm that she did her own singing.

And they’re not the only strong women in the cast. The mayor of the town is a big woman named Delilah Courtney (stage singer Nina Varela), who owns the local lead mines and rules over things with an iron hand, resorting to hangings when anyone breaks the rules of neutrality. Then there are the saloon girls at the Lead Dollar Saloon, who worked for Leslie’s brother (Reed Hadley) and then for Leslie’s character, Sally Maris, and give her all sorts of advice and assistance throughout the film. One of them is none other than Ann Savage, most famous as Vera, the hard-bitten femme fatale from Edgar G. Ulmer’s B-noir classic, DETOUR (1945). Fans of that film will be pleasantly surprised at how charming and attractive Savage could be in other roles. Also on hand is Virginia Christine, a veteran character actress who usually played housewives and suburban moms, but handles herself quite adequately in her saloon role.

The setting of the film is quite unusual. The time is 1863, at the height of the Civil War, and the locale is a little town in the Ozarks that straddles the border between Missouri and Arkansas, one Union state and one Confederate state. Mayor Courtney declares strict neutrality and orders the Union and Confederate troops to stay at least five miles away from town. One of her lead mines supplies the North and the other supplies the South. John Lund, top billed, plays a Confederate officer working undercover as a mine foreman. Brian Donlevy plays Colonel Quantrill, who leads a renegade force of rebel fighters working chiefly on their own and violates the neutrality rules when he brings his men into town. These men include Frank James (James Brown), Jesse James (Ben Cooper) and Cole Younger (Jim Davis). The town is full of men from both sides of the war and the slightest provocation could trigger a violent confrontation on the spot. In fact, the catfight between Kate and Sally begins because Sally is adamant about preventing Kate from singing “Dixie” in the saloon.

Also in the large and colorful cast are Minerva Urecal and Ellen Corby as outspoken town ladies; Richard Simmons (“Sergeant Preston of the Yukon”) as a Union army captain whom Kate tries to charm; Gordon Jones (Mike the cop from “The Abbott and Costello Show”) as a Union army sergeant; Richard Crane (“Rocky Jones, Space Ranger”) as a Union Army lieutenant; and Reed Hadley (“Racket Squad”) as Sally’s brother, who still suffers heartache from losing Kate to Colonel Quantrill two years earlier. Donlevy had played Quantrill quite memorably three years earlier in KANSAS RAIDERS for Universal. Jim Davis went on to star in the Republic-produced TV series, “Stories of the Century,” in which his character, railroad investigator Matt Clark, went after famous outlaws like the ones depicted here, in episodes that used stock footage from Republic westerns like this one. In fact, the opening montage of this film, showing Quantrill’s murderous raid on Lawrence, Kansas, relies on footage taken from an earlier Republic western, DARK COMMAND (1940), in which Walter Pidgeon played a character based on Quantrill.

The direction is by Allan Dwan, who’d been directing by this point in his career for 42 years. The screenplay is by Steve Fisher, a specialist at different kinds of pulp genre films (LADY OF THE LAKE, DEAD RECKONING, THE MAN FROM THE ALAMO) and he juggles the different characters and plot elements so well that no one gets lost or cut from the action. Every major character, and I count at least a dozen of them, gets their share of great scenes. Only one is written out early on to pave the way for the bold actions required by another.

Republic brought over auteur favorite Nicholas Ray to direct JOHNNY GUITAR the following year, in lurid Trucolor, with Joan Crawford and Mercedes McCambridge as dueling female antagonists and that film has always gotten extraordinary attention from western scholars and feminist film critics seeking to focus academic respectability on a film rich with Freudian themes and flamboyant theatricality. My sixth sense tells me that ordinary western fans would prefer WOMAN THEY ALMOST LYNCHED. I wish this film were better known and better appreciated.