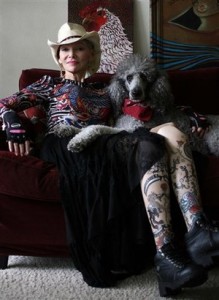 Oscar-nominated actress Susan Tyrrell, known for roles in offbeat films including John Waters’ “Cry-Baby,” has died. She was 67.
Niece Amy Sweet tells the Associated Press that Tyrrell died Saturday in her sleep at home in Austin. A Travis County Medical Examiner’s Office official says a cause of death is pending.
Tyrrell received a best supporting actress Oscar nomination for her role as barfly Oma in John Huston’s 1972 boxing movie “Fat City.” She appeared in more than 75 movies and television shows.
Sweet says Tyrrell spent the last 12 years in a wheelchair after her legs were amputated below the knee as a result of complications from a blood clotting disorder.
The Austin American-Statesman reports that Tyrrell, who was born in California, moved to Austin in 2008.