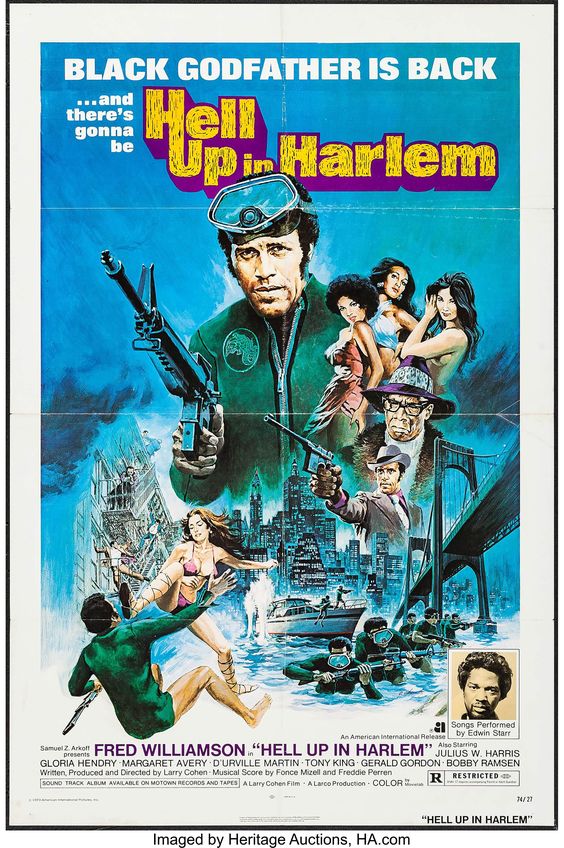 I loved Larry Cohen and Fred Williamson’s previous collaboration ‘Black Caesar’, one of the toughest and most enjoyable movies of the early 70s blaxploitation boom. That movie was a great success and in the rush to cash in with a sequel something was lost. Cohen was shooting his killer baby classic ‘It’s Alive’ at the same time Williamson was making ‘That Man Bolt’, yet they still attempted to make ‘Hell Up In Harlem’ simultaneously! Cohen’s script is weaker this time around and the emphasis is on fights (fists and guns) over character development and story. The movie is more of an action film than a crime drama and therefore much less interesting to me. Williamson is still a powerhouse, but the movie as a whole fails to satisfy. Gloria Hendry (‘Black Belt Jones’) and D’Urville Martin (‘Dolemite’) both return from the first movie but aren’t required to do all that much. You could even call their roles cameos and not be far wrong. Julius Harris (‘Superfly’) also returns as Williamson’s father, but this time round he has a much larger role, and almost carries the first third of the movie all by himself. The film directly follows on from ‘Black Caesar’ with Tommy Gibbs (Williamson) recovering from a near fatal gunshot wound. He relies upon his Pop to keep things together, and this enables Harris to blossom from a middle aged straight citizen into a cool dressing killing machine almost overnight! This is one of the most entertaining things about the whole movie, but not enough to stop it from being a disappointment. Even the score this time round is inferior, with no James Brown content. I think this movie was too rushed and suffers for it. It has its moments but isn’t a patch on ‘Black Caesar’. I’ve noticed that quite a few blaxploitation classics fail to deliver with their sequels (I’m especially thinking of ‘Foxy Brown’, Jack Hill’s weak follow up to his sensational ‘Coffy’). I wonder why that was? Greed perhaps, or lack of faith in the material, I don’t know. Anyway, ‘Hell Up In Harlem’ is okay, but it could have been, SHOULD have been a lot better! ‘Black Caesar’ is still brilliant though, don’t miss that one.