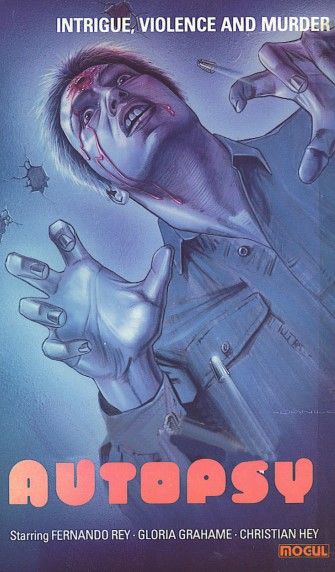 I must admit, the cover, the stars, and the gruesome story description will grab you. But that’s just one more wrench thrown into the confusion of the film known in English as Autopsy. For me, three things convinced me to get the DVD: Ray Lovelock, who starred later in the zombie classic Let Sleeping Corpses Lie (Non si deve profanare il sonno dei morti), the score is by Ennio Morricone, and the fact that 15 minutes was restored and the film is presented uncut for the first time here in the United States. I’m also a fan of the Italian giallos, which is what Autopsy really is, but I didn’t know that because the cover makes it appear as a possible zombie-oriented horror film, and the first ten minutes alone will have you believing that.

We’re given the idea that something like sunspots and flares are the force behind a sudden wave of suicides and that, along with exhaustion, are why medical examiner Mimsy Farmer is having hallucinations of corpses in the hospital coming to life and taunting her. Apparently this same sun problem is what sets off a killer to start killing people (that Mimsy happens to know) and making it look as if these killings were actually just another suicide. As it turns out he does have a motive, but this sun/suicide bit cand throw you. Like many giallos, there is an obligatory explanation at the climax that flashes back to a traumatic experience the killer had as a child (this kind of thing also happened in Don’t Torture A Duckling, aka “Non si sevizia un paperino” and Torso, aka “I Corpi presentano tracce di violenza carnale”).

It actually took a second viewing for me to understand the sun thing, the suicides, and the killings and put it all together–this film has so much going on that there are many distractions particularly of a sexual nature, you are drawn this way and that which is why connecting the plot points gets difficult at times. Is that a good thing? Well, this film doesn’t hold back and has a generous amount nudity, even full frontal. There is a scene where Ray Lovelock shows Mimsy a slide show of “vintage” erotic photographs that, in two of the quickly passing close-up photos you’ll find yourself saying “oh man, was that actually what I THOUGHT I saw?” and while not really pornographic will nonetheless surprise you since this film was made in 1973. Two sexual interludes (interrupted as they are) also add to the “this is getting gratuitous” element and an art gallery featuring photos of human torture are also present (I found these particular photos shocking and I thought I was jaded to these kinds of things). It wasn’t difficult for me to see what was cut for domestic release in the states–this film packs a visual punch and just keeps going.

All in all, I am glad I have this film as part of my collection because it is a curiosity that really can’t be ignored. Call it a guilty pleasure if you will. After understanding it from the second viewing, I started looking deeper into Autopsy and realizing it has its own personality and more of a story to offer than, say, the basic “let’s get women naked then kill them” mood of Torso. While Mimsy Farmer is a little difficult to warm up to with her once nice then cold moods, her part is played competent enough we still hope she gets through the ordeal. Barry Primus behaves like one of those people you hope doesn’t sit next to you on the bus–a bit on edge and prone to bursts of anger. Ray Lovelock is always interesting to see, particularly because of the choice of dubbing for his part–I’m wondering if some day I’ll get to hear his actual voice in a film! He also conveys an early 1970’s example of the masculine and sexual leading guy: bearded and real, instead of the cookie cutter cutie boys put in lead roles in films these days.

Anchor Bay gets points for taking these Italian gems and getting them restored so well that the picture looks better than most Hollywood film transfers. Some audio portions of Autopsy were not recorded in English, so a couple brief scenes are in Italian with English subtitles. An unusual move, but I appreciate the fact that at least the film is intact. One scene involving a newspaper headline and discussion of the sun is a key scene for the plot, and was one that was cut in American distribution because it wasn’t recorded in English. Now that it’s back in, it really makes a difference.

Autopsy is not a perfect film, not a bad film, basically one of those films that manage to grab your attention at any cost. For collectors of 1970s Italian giallos it has merit, for other folk, well, be prepared–you’ll be raising your eyebrows so much your face will hurt by the ending!!