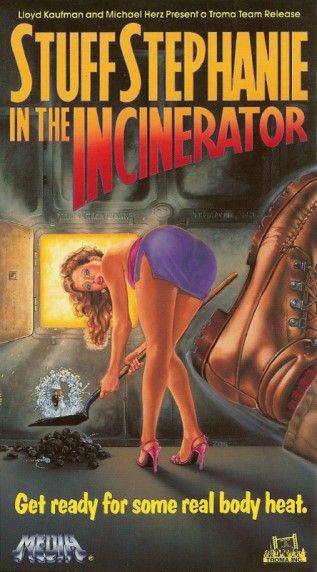 A PG-13 Troma movie? Yeah, and it’s actually a pretty good one at that. So, obviously Stuff Stephanie In The Incinerator isn’t “Decampitated good”, or “Blood Sucking Freaks good”, but rather “why is this a Troma movie good”. Don’t worry, it’s still a bad movie. Aside from the catchy title, Don’t Stuff Stephanie In The Incinerator is fairly normal… well, normal compared to any other Troma title I’ve seen. No Gore, or even nudity that I can recall, just a decent, well-thought-out story, with plenty of twists, and even some passable acting along the way. A story that shows exactly how far rich people, with too much time on their hands, will go to amuse themselves. Apparently, after achieving wealth, role-playing games are the next step to achieving true bliss. Not just any Role-playing games, but entire scenarios, outrageous scenarios, which could last for days, or even weeks at a time. living as their chosen character, and following the script till the very end. We the viewer are oblivious to when one scenario ends and another begins. A story with enough twists to keep just about anyone on their toes. Definitely interesting enough to keep you awake too. Well, the truth is, most people, or even most fans of bad movies would probably see this movie as a confusing, low-budget joke, and a waste of your time and money, not to mention Troma’s money. And you’re right, this movie will most likely never be apart of the Tromasterpiece Collection, But stick with it till the end, friend, and you’ll see that Stuff Stephanie In The Incinerator, at the very least, is intriguing…. well, despite the fact that no one really ever gets stuffed in anything, but intriguing, nonetheless.