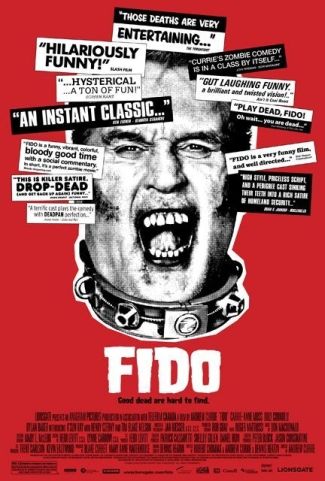 In a 1950s alternate universe where radiation from space has turned the dead into zombies. This radiation still plagues humanity, as all those who die after the original contamination turn into the undead. In order to continue living normal lives, communities are fenced with the help of a governing corporation named Zomcon. Zomcon provides collars with accompanying remote controls to control the zombies’ hunger for flesh so as to use them as slaves or servants. In the town of Willard, a housewife ,Helen, buys a zombie in spite of her husband Bill’s zombie phobia. Their son, Timmy, befriends the zombie, naming him “Fido”. One day Fido’s collar malfunctions and he kills their next door neighbor, who turns into a zombie. Timmy “kills” the zombified neighbor. When a pair of local bullies are blamed for the missing neighbor, they capture Fido and Timmy. Helen comes and rescues Timmy and Fido from the bullies and they try to forget about the whole thing. Several days later, the neighbor’s body is found and the murder is traced back to Fido, who is taken away to Zomcon where the public is told he will be destroyed. Timmy learns through a friend that Fido is simply working in a factory at Zomcon. Timmy sets out to rescue him with the help from his neighbor with a zombie girlfriend in hopes to get Fido back.

I really do highly recommend this movie if you get the chance to see it, it’s so silly but a lot of fun. Billy Connelly did a great job as Fido and really brought, no pun intended, a lot of life into the character. I think the scene that made me laugh the most was when Timmy has to burry the old lady that Fido attacked and killed, his last words to her were so funny, “you weren’t really nice, but you liked flowers, so…” and he buries her in the garden. Not to mention the neighbor with the zombie girlfriend, sick, disturbing, wrong, but classic laughs. I still love how even though this is like the Leave It To Beaver-esquire type of world, there still is a lot of gore in the movie. So if you do have a chance to see Fido, take it,