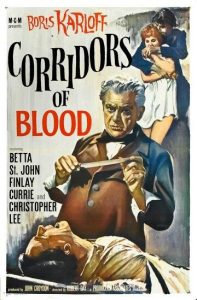 This is a deceptive little film. First off, because it was made and sat for four years before release, you might be inclined to think it is a dud–but that’s far from true. The film is very good–good enough to almost earn an 8. Second, while the film has some horrific scenes and features Boris Karloff and Christopher Lee, it is not a horror film but more of a drama. So if you see it, don’t expect monsters or madness–instead, there are just bad people and good people doing bad things.

The film is set in 1840 and Karloff plays an exceptionally skilled surgeon who is dismayed that there are no drugs to alleviate the suffering of patients during surgery. Basically, people were wide awake and felt EVERYTHING during surgery and amputations! This is true, as the first anesthesias didn’t come about until around 1850. Despite his concerns, other doctors didn’t share his enthusiasm for change, so Karloff foolishly begins experimenting on himself–inhaling a mixture of various chemicals (including opium). Not surprisingly, he becomes addicted and this once sweet man becomes an unwilling pawn in the seedy underworld.

The film gets very high marks for construction, writing, direction and the performance of Karloff. There isn’t much I’d change about the film, though fans of Christopher Lee might be disappointed that his role isn’t that big and his character isn’t that interesting (despite the fact he’s a cold-blooded murderer). Give this intelligent little film a watch–it’s really very good.