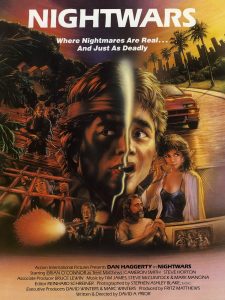 I have commented before on how I generally find David A. Prior’s ideas to be really cool, but his direction to be very poor. The big exception to this was `Lock ‘N Load,’ which I found to be great. Other good Prior movies are the higher-budgeted `Raw Nerve’ and the silly but fun `Invasion Force.’ I watched `Night Wars’ not really knowing what to expect. The plot sounded neat, but it was still a low-budget AIP movie with only one name star, Dan Haggerty. But as it unfolded, I was really surprised.

Two Vietnam buddies, Trent and Jim, trying to live normal lives, start to have bad dreams nine years after their time in the war. Their nightmares are always about the war and a third friend, Johnny, who they left behind in the hands of an American turncoat, McGregor. Eventually, the nightmares begin infesting themselves in the daylight hours when Trent and Jim start to fall asleep at any given moment, and that’s when events in the dream start to cross over into reality, like when one of them gets cut in a dream, they get cut in reality. That is when the two friends realize they must somehow enter the nightmares willingly and either get Johnny out this time or die trying. At the same time, Trent’s wife has contacted a psychologist (Haggerty), also a Vietnam vet, about her husband’s odd activity. Concerned, he tries to intervene at the worst possible time.

This movie has a lot going for it and for once an AIP movie is not at all hindered by its budget. Prior’s early dream sequences are quite good. He makes good use of lighting to make them scary. He keeps early dreams dark and adds neat touches like red tints which makes soldiers wearing dime store rubber skull masks look convincing and freaky where in any other way they would have looked silly. There are also some rather impressive effects. The scene where Trent sees McGregor in the mirror and McGregor sticks a gun into the mirror is a radical and inexpensive special effect. The soldiers rising out of the dirt had a good effect, too. And the scene where Haggerty, having given Trent and Jim sedatives, is racing to Trent’s home to try and save Trent’s wife is exceptionally done. And of course it is all made better by a fine musical score by Tim James and Steve McClintock. I was all set to give this movie an 8 or 9, surpassing `Lock ‘N Load’ as the best of Prior’s movies, when the ending happened. I won’t reveal what it consisted of, but I will say that it was a cop-out. Gone was the adrenalin in my blood for what would happen next. Gone was the hope that an explanation of how the events were happening would arrive. Gone was the atmosphere that had been looming so well over the whole movie. This is the only black mark on an otherwise great low budget film (well, other than spotting a crew member’s hand tossing a gun onto the screen after a soldier was shot), but it is a serious one. The result for me is that it ties `Lock N’ Load’ as Priors best movie (out of the twelve I have seen).