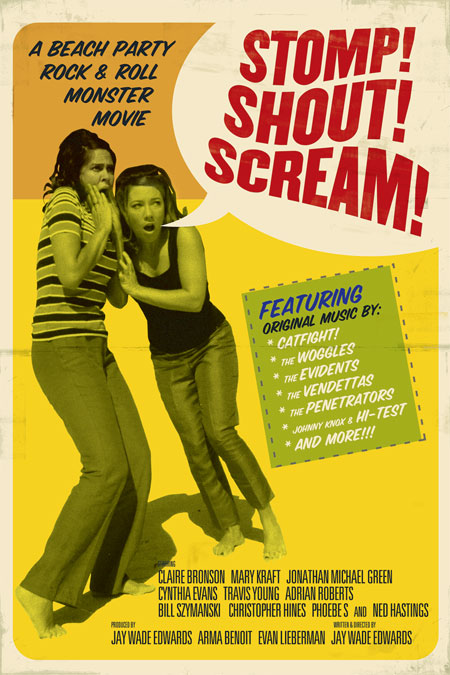 Will the Thrill: You obviously adore genre movies from the 50s and 60s (as do many, but not enough, of us). How were you exposed to these old films?

JWE: I watched A LOT of TV as a kid in Bradenton, Florida.  Instead of going out to play in the summer, I’d watch sitcom reruns, especially The Dick Van Dyke Show. Every Saturday afternoon however, I’d watch Dr. Paul Bearer on WTOG’s Creature Feature.  He was a fantastic horror host, specializing in great/terrible puns and fake product placement (“Bleeder’s Digest”), along with a double-feature of “horrible old movies” as he always described them.  That’s where I got hooked, but I’m still watching.  I watched The Land Unknown (1957) this afternoon– dinosaurs vs. the navy inside a volcano, shot in CinemaScope!  Completely ridiculous, but awesome at the same time.

Thrill: Were there any particular films that influenced Stomp! Shout! Scream! and you as a filmmaker in general?

JWE: I aspired to write a script as good as the ’50s & ’60s monster movies that transcended the genre, like Creature from the Black Lagoon, Forbidden Planet, and all the 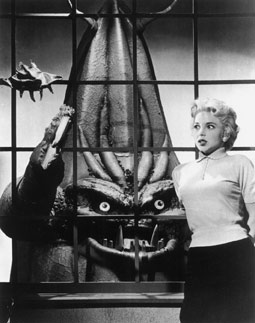 Universal monster movies.  My favorite of the rest of those films is Roger Corman’s It Conquered the World (1956) with Lee Van Cleef and Peter Graves.  There’s certainly some Peter Graves in Jonathan Green’s performance as the scientist in Stomp! Shout! Scream! What really got me thinking about writing a ’50s monster movie was seeing Them! (1954) at the Starlight Drive-in, here in Atlanta.  That is such a good script, really well paced, and before you know it, you’re totally sucked into a ridiculous giant ant movie.  Plus, these monster movies all have a naive morality that’s really refreshing in a world so full of cynicism.  The triumphant hero always delivers a speech at the end of the film, “We dodged a bullet this time, but when… when will man learn the evils of atomic power/greed/etc?”

About the same time, I also was watching every ’60s rock and roll movie I could find, including all the beach party films, mainly because I’m a garage rock addict.  I just love that period of the ’60s– after the Twist hit big, when garage bands figured out how to play noisy, distorted guitar licks, but before things like psychedelia, Vietnam and Watergate ruined the innocence of it all.  I combined all the things I loved about those genre movies, but tried to do it with a characters an audience would care about and a story that speeds right along.

Thrill: The music, fashions, cinematography and even the dialogue in Stomp! effectively recreate the era of the mid-1960s with affectionate authenticity. How difficult was it to pull off a homage without slipping into satire, especially of such an inherently silly genre?

JWE: I made 3 short monster movies before attempting Stomp! Shout! Scream! and learned pretty quickly that parody only lasts about as long as a good Saturday Night Live sketch.  It’s virtually impossible to sustain parody for an entire feature.  So I set out to make a beach party rock and roll monster movie, but a really good one.  My goal was to make an endlessly fun and entertaining movie, but not at the expense of crafting something that looked, sounded and felt completely authentic.  That’s why we shot on 35 mm film, used practical locations, and actual vintage costuming.  We set out to make this film just like they would have in 1966.  The cast of mostly-Atlanta actors also deserves a lot of the credit.  They all got what I was going for and nailed it.

I should mention the soundtrack, too.  It’s a whose-who of garage rock with original songs by Catfight! performed by the actresses playing the band in the movie.  The Woggles, The Penetrators, The Hate Bombs, The Evidents, The Vendettas, The Clutters, Johnny Knox, Tiger! Tiger, and The Fleshtones all contributed songs that add to really selling the time period.

Thrill: What was the inspiration for the “Skunk Ape” as opposed to the standard aquatic fish monster? (Extra gorilla costume lying around…?)

JWE: Growing up in Florida, I heard the legend of the Florida Skunk Ape my whole life.  I’d go fishing down in the Everglades and my Dad would try to scare me and my brother with stories like, “See that indention in the sand… Skunk Ape slept there last night,”  or “see how that tree hangs over the water… Skunk Ape did that… nothing else could have bent it that way.”  It was always something completely ridiculous, but still scared me.  When I first met with Evan Lieberman, Cinematographer and producer on SSS, we hit it off immediately, not just because he was mad that I wrote a skunk ape feature before he could!  The year we shot the film (around Bradenton, Sarasota & St. Pete, Florida), there were several hurricanes that hit Florida and lots of Skunk Ape sightings, so I still believe!

Thrill: What’s your next project? More retro fun or are you going to try something different?

JWE: I have ideas for two more Skunk Ape movies, a Skunk Ape Trilogy.  Each successive film jumps ahead 5 years, so part two is early ’70s with a country music soundtrack, then part 3 is late ’70s punk rock.  I’d hit all my favorite musical genres that way.  But those scripts aren’t written yet.  Right now, I’m working on a script about an imaginary late night horror host, like Dr. Paul Bearer or Ghoulardi or Zacherle, and his crazy life that he hides behind his horror host persona.  It’s set in the early ’60s.  I just love that time period, it was such a transition in the US, that I think makes a great setting. 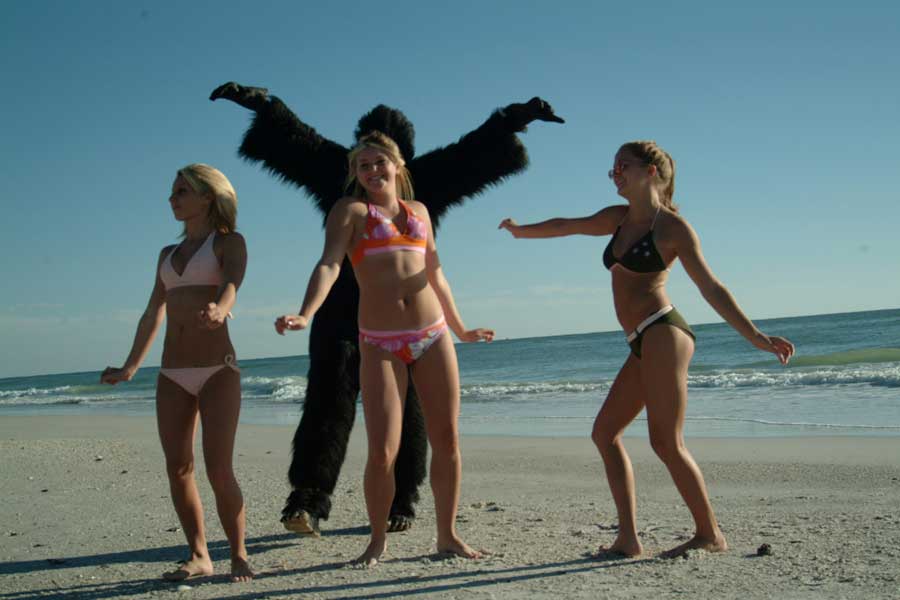