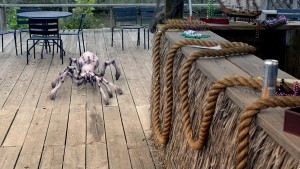 After watching this movie and the previous two films of Syfy’s “Most Dangerous Month on Television,” it seems that for this “set” of movies at least the SyFy channel has embraced and somewhat reinvented with a modern flare the Saturday night Drive-In Science Fiction B-movie of the 50’s and 60’s… and I like it! Let me tell you, the critters in “Arachnoquake” are not your friendly neighborhood spiders… man!

This movie didn’t remind me of other sci-fi spider movies such as “Arachnophobia” or the over-the-top “Eight Legged Freaks” as much as it did “The Giant Tarantula” starring Leo G. Carrol of “Topper” fame. The premise is a simple one: After an earthquake the night before opened up fissures throughout Louisiana — later we are told it was caused by the oil companies drilling for fossil fuels; Darn those oil companies, hasn’t LA suffered enough! — albino spiders of various size emerged out of them to terrorize New Orleans. And to my liking it doesn’t take long for the action to start either.

The movie opens with some good ol’ bayou boys sorting eggs outside at a “plant.” They talk about feeling an earthquake the night before (although one of them thinks its aliens). One of their co-workers comes up to talk to them and he tells them his back is itching. (As if he’d been bitten by something?) His boss tells him to go and investigate an issue at another building elsewhere, and as he drives he comes up on one of the fissures in the middle of the road. He gets out to investigate, and while looking it over his back starts to do more than itch — it starts to really hurt. He doesn’t know what it is, so he pulls his shirt up to see if he can see what it is in his truck’s side view mirror. As he’s looking, the bite pustule we see all of a sudden swells up, bursts grossly, and out of his shoulder we see a spider emerge. All of this transpires in about 10 minutes… now that’s B-movie action! Of course then the spiders falls to the ground and forces the shaken man backwards until he fall into the crevice. Why he didn’t just step on the spider (about half the size of his hand) or just step to the side I don’t know. I was just happy to see the spider crawl out of his shoulder; it made the moment for me!

While this is going on we meet the main characters of the movie. Sam (Ethan Phillips) is a father and the owner of a New Orleans bayou tour company. His son Paul (Bug Hall) is a lazy, irresponsible young man who would rather party than work, and who, when he arrives late for work, is sent by his dad to drive the tour bus instead of the boat. The boat tour responsibility is given to his sister Petra (Olivia Hart) who looks like Farrah Fawcett and dresses like Daisy Duke. Did I fail to mention this is also an exploitation movie too! There is little left to the imagination of Petra’s… ahem… attributes. If that is not enough, another group of main characters are comprised of a bus load of high school cheerleaders all wearing (you guessed it) short-shorts! They are being driven by Charlie (Edward Furlong). Yes, that’s right, Edward Furlong who played John Conner in “Terminator 2: Judgement Day.” He is supposed to be joining his wife Katelynn (Growing Pains’ Tracey Gold) and his kids on a tour together, but his sister, who is supposed to drive the busload of cheerleaders, has mysteriously been bitten by something. Hmmmmm, wonder what it could be.

So he drives the cheerleaders while Katelynn and the kids get on the tour bus driven by… you guessed it, Paul. From there on we are treated to the exploits of our stars trying to figure out where all of these spiders are coming from. Some, as one of the other passengers on Paul’s tour bus says, are, “Jumbo spiders as big as dwarfs.” There’s even another scene where a bite pustule rises and pops out of the neck of a shop clerk. This one reminded me of the carnival game were you shoot a stream of water into a hole and it blows a balloon up until it pops (sounds like it too).

The giant spiders don’t really look like spiders we see everyday, like in “Eight Legged Freaks.” They look more like a cross between a spider and a tick. More scary than horrific. These aren’t your ordinary giant spiders from the bowels of the earth though, oh no. I kept track throughout the movie and from what I was able to notice these spiders are large, they jump, they bite with fangs, they shoot out a tendril that seems to “sting” victims… and the coup de grace… they can shoot flames from the “swamp gas” that is in their gas bladders! (We learn this because Katelynn, an 8th grade science teacher dissects one in order to find a way to stop them.) The “queen spider,” is so big that if the other spiders are “Jumbo Dwarfs” then she must be a “Tiny Giantess!” In any case not only is she big, but we learn that she controls all of the other spiders, so if they can kill her they can kill the others. But wait… did I mention that it appears she is also bullet- and “hand held rocket-” proof too!

There appears to be no way of stopping the “mother of all spiders” when she comes out of her hole in the ground, but Paul (who “grows up”) finds a way, and it is unique. All I can say is… ever hear a spider fart? Know what happens when you light one?

That’s another thing that reminded me so much of the old sci-fi movies, the use of corny sound effects. I remember in “Tarantula” as that spider (not CGI but a real tarantula somehow shot to look like a giant spider) is walking through the desert landscape to return whence it came, the roar of the spider (it roared) sounded just like it was saying “home” over and over again!

This movie was fun and I have to say well-acted too. Well-acted because many of the lines in this movie are funny and corny, and to be able to deliver their lines with a straight face and conviction I don’t think is easy. The actors all truly tried their best. While they all did a good job, I especially thought that Ethan Phillips (props to my fellow “Long Islander”) and Edward Furlong were standouts. They spoke their lines with such fluidity that it didn’t seem as if they were speaking lines, and I look for that in all movies, be they “B-movies” or “A-lister movies”

“Arachnoquake” took me back to my sci-fi youth, when I was molded (or corrupted, some might say) by such classics as “From Hell It Came,” “Fiend Without A Face,” “Giant Mantis,” “The Blob” (the original Steve McQueen version), “It, The Terror From Beyond Space,” and others. There were some startling moments, but not so much that the movie relied on those to make it frightening. I liked when the “Queen Spider” is seen climbing the sides of the buildings; we don’t see any windows breaking or buildings crumbling. Crazy as it seems I liked that because I can’t tell you how many moves where I’ve seen the likes of giant spiders, locusts, ants, scorpions, Gila monsters, and praying mantises shown the exact same way. In those days they would just put the actual live insects on cheap miniature (sometimes cardboard) models and have them crawl all over them. The director (Griff Furst) did a very good job in capturing the fun and campiness of those movies. “Arachnoquake” is never frightening nor even really scary. It’s just… monstrous… but in a good way.

I can’t help to think what “Peter Parker” would have turned into if he was bitten by a radioactive version of one of these spiders. “Godzilla perhaps?