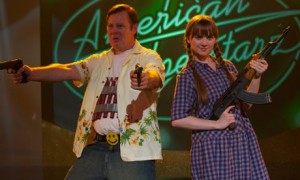 Bobcat Goldthwait’s violently dyspeptic new black comedy God Bless America is, at heart, a pretty bad movie: dialogue is mainly standup-style rants; the too-spelt-out script feels first-draft, if that, and Bobcat’s no better a director than he is a writer. So how come I like it so much?

God Bless America
Production year: 2011
Country: USA
Cert (UK): 15
Runtime: 105 mins
Directors: Bobcat Goldthwait
Cast: Joel Murray, Mackenzie Brooke Smith, Tara Lynne Barr
More on this film
Here’s why: I like it for its cri de coeur qualities, its spirited loathing of stupidity, bullshit, euphemism, cant and a crap, pseudo-patriotic culture based on humiliation and contempt for the audience. If you dug this film up in a time-capsule a century from now it might offer, maybe unwittingly, certain unpalatable truths about the suicidal Tailspin America of today that nobody else is noting.

The plot is back-of-a-napkin basic: sad-sack salaryman Frank (Mad Men’s Joel Murray) loses his job and gets diagnosed with a brain tumour on the same day. His neighbours are loud and vulgar and have a screaming baby, and Frank fantasises about murdering all of them. He channel-hops from one cultural obscenity to another – satirical versions of TMZ, American Idol, which Frank calls “the kind of freakshow that comes along every time a mighty civilisation’s collapsing”, and My Super Sweet Sixteen – until he’s so irate he hits the highway with his handguns. First job, drive cross-country to shoot Miss Super Sweet Sixteen, one Chloe, in the head. Thenceforth he’s accompanied by Chloe’s psychotic 15-year-old schoolmate. Roxy (Tara Lynne Barr – watch this face) who wants to kill everyone from Twi-Hards to women who call their tits “my girls”, people who high-five, and even screenwriter Diablo Cody – “the only stripper in the world with too much self-esteem”. Frank, a small-C Eisenhower conservative, just wants people to be civil. They execute people who talk in the movies or take two parking spaces, before graduating to political and media targets, including disguised versions of Bill O’Reilly, that creepy “God Hates Fags” clan cult, and a climactic massacre at the “American Superstars” season finale.

God Bless America, cack-handed as it often is, scores for its unabashed B-movie willingness to indulge the cheapest, most pornographic American revenge-fantasy of all: let me just machine-gun my evil, moronic, braindead enemies in the face forever and ever, or until I feel better, whichever comes sooner, amen. An easy catharsis, then, but oh, it’s funny, too. It joins a small but growing genre of obsidian-black, quasi-apocalyptic comedies each diagnosing demented fantasy and suicidal self-deception as characteristic symptoms of the feverish last days of American civilisation.

To quote the first words heard in Observe And Report, sung on the soundtrack by the Band’s Levon Helm: “Well, the streets of Rome/ Are filled with rubble …” Sic Transit Idiotia, God Bless America.