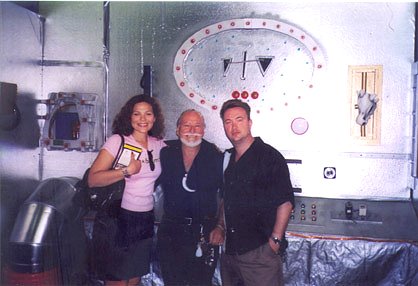 The term “living legend” tends to get overused, but in the case of TED V. MIKELS, it can’t be overstated. Ted is the Energizer Bunny of grindhouse cinema, from the sublime sci-fi schlock of The Astro Zombies to the grrrl powered action of The Doll Squad to the occult kookiness of Blood Orgy of the She-Devils and beyond. This friendly, jovial yet non-nonsense filmmaker also looks like a punk rock Santa Claus, and he keeps grinding out those goodies year after year, whether you’ve been naughty or nice. I recently caught up with the incredibly indefatigable, infectiously inspiring indie icon and I was left breathless…

Will the Thrill: You are inexhaustible and amazingly prolific. To what do you attribute your longevity in this business?

TVM: Longevity?  Only been at making movies for sixty years, just getting started on my best ones yet to come.  Creating movies one after the other is what keeps me inexhaustibly busy and happy, doing what I love.

Thrill: What is (are) your personal favorite(s) of your many films?

TVM: That’s a hard one to answer. Every movie, when you conceive the idea, write the script, produce, cast, direct, (often light and shoot) ,edit (sound, sound effects and music)   then market, usually takes the best part of a year. (I’m not into making week-end wonders.) The total focus, blood, sweat, tears, money, anxieties, all take their toll on you. Each and every movie brings new friends, personalities, memories, business releationships into play, and these remain so after each and every movie. So basically there are no favorites for me, each has been akin to ” climbing the mnountain” to accomplish and put the movie out there for the world to see and hopefully enjoy. 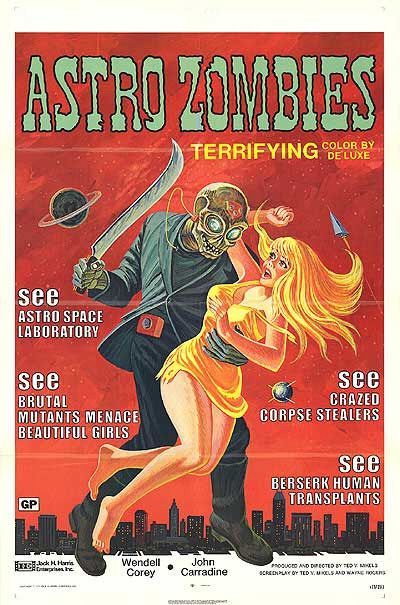 Thrill: Who are your film-making influences?

TVM: I don’t know that I have any, I’ve been much too deeply involved in creating my own movies, that I go long periods without ever seeing anyone else’s movies.It was never my intention to make horror movies like The Astro Zombies, The Corpse Grinders, etc. Outdoor action-adventure  was where I wanted to focus. Marketing really dictates what you need to make. I  particularly liked Dr. Zhivago, and a few other of David Lean’s movies. I liked Breakfast at Tiffany’s,  Excalibur, some James Bond movies, good meaningful Martial Arts  films, especially if the Black Belts happen to be my friends. It’s hard for me to watch a movie for the movie’s sake, I tend to observe the lighting, camera placements, editing cuts and cut-aways, inserts, listen to sound effects, watch and liisten for visuals and audio that does not match. I observe camera movements, shots that seem to be meant to just be creative on the part of the cameraman, or when the proper coverage is there to tell the story. I always look to see that the editor has used the proper cuts that the director has given him to work with, meaning eyes looking the correct direction, who and what the eyes are seeing,, etc. So you can see that I get a different meaning from watching movies from what some-one else might see. CAN’T HELP I T, I’M A MOVIE-MAKER. 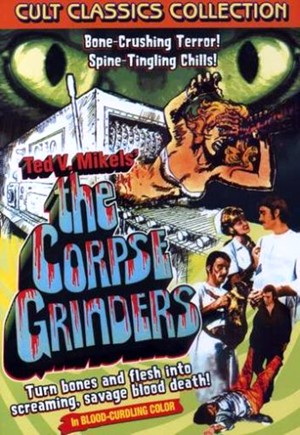 Thrill: Las Vegas has been your home base for decades. What about Sin City appeals to you, besides working outside the constraints of the Hollywood mainstream?

TVM: Shooting in Las Vegas gives me many more advantages than what I had to deal with in Hollywood. First, the Nevada State Film Commission works hard to help you make things easy.  Also, you don’t have every community where you want to shoot with their hands out to collect often $2,500 or $3,000. per day if you want to put a tripod and camera down on the ground. When I was told in Hollywood that I had to hire at least two policemen, and two firemen if I wanted to shoot INSIDE my OWN HOME, that was too much for me.  I HAD to get out of my HOLLYWOOD OFFICES in the STUDIOS, and go where I could exercise my creativity without the fettering of all the difficulties to encounter.  Nevada has just about everything I need for shooting my movies. We who live here do not think of it as SIN CITY, it’s home. 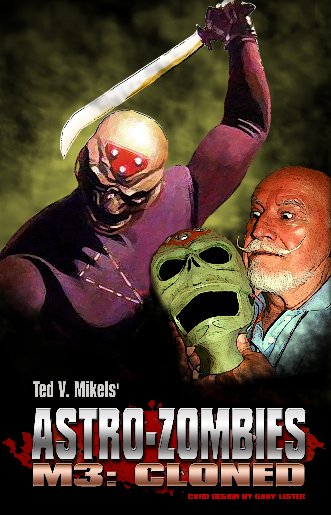 Thrill: Tell us about Astro Zombies M3: Cloned and other projects you’re working on.

TVM: Astro Zombies M3: Cloned is my project right now. We’re shooting a big scene in a simulated AREA 51, this week. It’s about a forty-mile trek into the desert. Escaped CLONES of the ASTRO ZOMBIES roam the desert looking for victims. There are rattle-snakes to be aware of, and thirst to stave off, no bathroom facilities of course (we have no ” honey-wagons”,) cast and crew deal with the elements, etc. A LOT of FUN and EXCITEMENT. I have about four other projects that as always, must find some bit of financing to get off the ground, like Space Angels, Las Vegas Head Count, Two Feathers and Little Hawk, and more in the works.  People ask me when I plan to retire. My answer?  WHEN I’M 104, I’LL SLOW DOWN, but until then, I’M MAKING MOVIES.