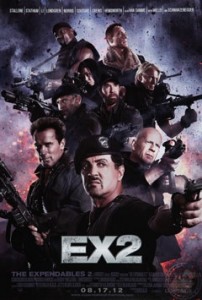 The Project: The Expendables 2
The Panel: Stars Sylvester Stallone, Arnold Schwarzenegger, Terry Crews, Randy Couture, Dolph Lundgren. Moderated by The Los Angeles Times writer and Hero Complex’s Geoff Boucher
The Big Revelations: Arnold came to Hall H! The former California Governator made a triumphant appearance to a standing ovation, and proceeded to alternatively joke with and compliment the rest of the panel.
Footage Screened: Both Stallone and Schwarzenegger were welcomed to Hall H with an aggressively edited retrospective of their respective cinema careers, which included brief clips from Expendables 2 that could be best summed up with the word KERPLOW!
COMIC-CON 2012: Get the latest news, photos, and more
A full clip from the film played at the very end of the panel, featuring Jean-Claude Van Damme as the main baddie strolling through a panicky airport backed by his goons, all of them armed to the teeth. Suddenly, three figures appear behind frosted glass! It’s Arnold! And Sly! And Bruce Willis! WITH GIANT GUNS! They fire the guns directly at Van Damme and his goons; some goons are shot, Van Damme is unharmed! Suddenly, Chuck Norris appears and kills a guy! Then Terry Crews and Randy Couture appear and kill guys! All hell breaks loose! Any and all intact panes of glass are shattered! Squibs explode! Stunt men fly every which way! Arnold, Sly, and Bruce group up! Bruce sees Van Damme getting away! Sly runs after him! Arnold turns to Bruce!
“Ahl be back!” says Arnold!
“You’ve been back enough! I’ll be back!” says Bruce, who runs off!
“Yippee-kai-yay,” says Arnold, dejectedly.
The crowd roared!
Snap Judgment: If the aforementioned synopsis gets you tingling, you’re in for a treat. If not, Sparkle comes out the same weekend (Aug. 17).
Most Incisive Audience Question: A fan noted that in Rocky 2, Stallone has the line “I’m expendable,” and asked if that’s where he got the title. “Yeah! I did!” said a grinning Stallone. “I ripped myself off!”
Most Awkward Audience Question: No one dared ask Schwarzenegger about his divorce from Maria Shriver, but one fan did toe close to that territory when he asked about the status of The Governator, Schwarzenegger’s planned animated series with Stan Lee that was supposed to incorporate the actor’s entire family. With a neutral face, Schwarzenegger batted away the question with a practiced piece of non-committal rhetoric: “It’s still being developed. We will announce something probably very soon.”
Funniest Audience Question: A pair of twins, in matching E.T. t-shirts, asked Schwarzenegger: “What can you tell me about the sequel to your movie Twins?” (Yes, it exists. It’s called Triplets, it’s in the very, very early stages, and it may also star Eddie Murphy as the third brother. That is not a joke.)
The Winner of the Panel: Though Stallone and Schwarzenegger received a great deal of attention, Terry Crews stole the show after Schwarzenegger waxed poetic for a full minute about Crews’ muscle definition and lack of body fat. “I can die now!” said a beaming Crews. “Arnold liked my muscles!”