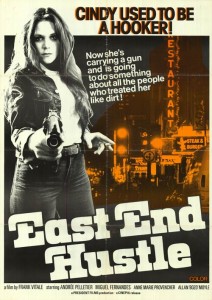 BBAM! Gallery is proud to present FORBIDDEN VISIONS, an exclusive exhibition of uncensored fantastic film and underground cinema poster art from the Cinepix / John Dunning archives. The show is a collaboration with the Fantasia Film Festival and will run until Aug 26.
Our vernissage is this Friday, July 27, 5-8pm and will feature special guest Greg Dunning (son of John Dunning) and a chance to win one of the posters from the exhibition.
Producer/Writer John Dunning founded the legendary Cinepix company in 1962 with partner Andre Link, responsible for such films as My Bloody Valentine, Shivers, Rabid, Meatballs, Ilsa – She Wolf of the SS, Le Diable Parmi Nous, L’Initiation, Valerie, and the distribution of hundreds more in the horror, erotic, foreign and exploitation genres.
We are also happy to announce that the money raised in the show will be used to establish an annual cash award at Fantasia in John Dunning’s name.
Greg Dunning explains:

“When you talk to anyone that worked with my father they will tell you that he was nice, honest, generous, and inspirational. He was twice that as a father. He believed that if you are not forgotten then your life was not wasted. I met recently with Fantasia president Pierre Corbeil and mentioned this objective. We both agreed that the best way to create a legacy for John would be to sponsor a meaningful annual cash award at Fantasia. I think that if Fantasia had existed during the Cinepix production years that it would have been the natural venue for Cinepix premieres. Secondly, Cinepix was a Montreal institution, like Fantasia has become, so it is the right place for his legacy to reside.”