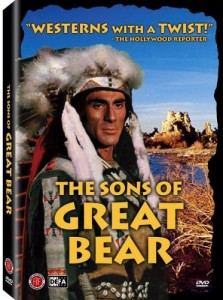 So, you’re a true Western aficionado. You’ve seen every John Wayne film, every Joel McCrea and Audie Murphy B-movie, and the spaghetti flicks from Leone. You’ve watched the silent classics and the singing cowboy adventures, the serials and the TV shows from the 1950s. You even managed to make it through Billy the Kid vs. Dracula and The Terror of Tiny Town.

But have you seen Lemonade Joe, or The Sons of Great Bear? How abut White Sun of the Desert? These are just some of the dozens of westerns and western-influenced films made in the Soviet Union and Eastern Bloc countries in the 1960s and ’70s, back when the Iron Curtain divided east and west. Dubbed “Red Westerns,” they presented stories of frontier life, daring outlaws and noble Native Americans, in which the Ural Mountains and Volga River stand in for Monument Valley and the Rio Grande.

Given the tensions between Washington and Moscow, some filmmakers were determined to undermine traditional western themes and archetypes, to expose the shallowness and decadence of the most American of movie genres. And while a few titles exploited that counterpoint (a typical scenario portrayed the Indians as heroes and the cowboys and cavalry as villains), others simply told the same stories in a different setting.

As might be expected, none of these films ever played in US theaters, and they weren’t like to turn up on the late show, even in the cable era with more channels looking for anything to fill out a 24-hour broadcast schedule. For years, the only way to see a Red Western was to rent one by mail from such specialty houses as Facets Multimedia. But today, they’re as easy as a keyboard click.

For adventurous moviegoers ready to embark on a unique cinematic trail ride, here are five Red Westerns available from amazon.com.

The Sons of Great Bear (East Germany, 1966)
This is the first of 12 “Indianerfilme” movies starring Gojko Mitic, produced in East Germany between 1965 and 1982. Even with a German script, a Yugoslav leading man, and location filming in Yugoslavia, Bulgaria, Mongolia and Czechoslovakia, The Sons of Great Bear is among the Red Westerns most indistinguishable from an American production. Five minutes in, and German-speaking Dakota Sioux Indians are no longer an issue. Set in the Black Hills, this is a standard but engaging cavalry vs. Indian tale, sympathetic to the Sioux, but not immune to the occasional “How!” in the subtitles. Buy on Amazon.

At Home Among Strangers (Soviet Union, 1974)
A brash cavalry officer, tired of paperwork and bureaucracy, joins the guard detail on a train carrying a gold shipment to Moscow. While that set-up could describe any number of Hollywood westerns, At Home Among Strangers is set in the 1920s, following the Russian Civil War between the Bolshevik Red Army and the anti-Bolshevik White Army. The more you know your Russian history, the easier it will be to separate the heroes from the bandits. Director Nikita Mikhalkov establishes a strange but familiar tone similar to Italian westerns, juxtaposing close-ups and insert shots with wide vistas, incorporating flashbacks and punctuating quiet scenes with odd music choices. Buy on Amazon.

Lemonade Joe (Czechoslovakia, 1964)
From the first sepia-toned stunt sequence, of a barroom brawl set to barrel house piano, Lemonade Joe plays like a factory-assembled western. Dance hall girl? Check. Hero dressed in white? Grizzled fiddle player in top hat? They’re all here. But when one barfly swigs his whiskey, then starts eating the glass, the film veers into Benny Hill territory, and that broad, boisterous tone leaves viewers wondering if this Czech western is laughing at its cowboy clichés, or with them. I’d argue for the latter, as it seems everyone is having too good a time playing dress-up to indulge in anti-Western invective. As Lemonade Joe (named for his saloon drink order), Karel Fiala is a cross between Dudley Do-Right and Tom Berenger in Rustlers’ Rhapsody. Buy on Amazon.

The Prophet, the Gold and the Transylvanians (Romania, 1978)
This was the first in a trilogy of films following the misadventures of three Transylvanian brothers in 19th century Utah. They quickly acclimate to their surroundings, whether that’s poker with ex-Confederate soldiers, tracking down stolen gold, or defending a miners’ camp from a band of gunfighters. It’s a comedy, but not a farce like Lemonade Joe. There are quiet, dramatic moments that work, and the climactic gunfight is a dynamite action sequence that will leave viewers primed for the sequel. The Prophet, The Gold and the Transylvanians is not available on Amazon, but it can be viewed in its entirety on YouTube.

The White Sun of the Desert (Soviet Union, 1969)
A Red Army soldier, journeying home to his wife, is caught up in a battle between a Red cavalry unit and a band of rebels. He is appointed guard of the rebel leader’s harem, and defends them from repeated attacks while fending off their amorous advances. More than 40 years after its release, The White Sun of the Desert remains one of the most beloved Russian films of all time. It added expressions to the Russian language, (most famously, “East is a delicate matter”), its theme song is a perennial favorite (think “Over the Rainbow” or the Star Wars main title here), and Russian cosmonauts frequently sought inspiration from its heroic themes before being launched into space. As the reluctant hero Fyodor Sukhov, Anatoly Kuznetsov has a stoic quality that recalls Clint Eastwood. Buy on Amazon.