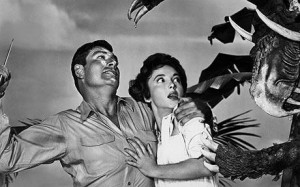 From ’50s sci-fi horror to exploitation flicks of the ’70s to Mystery Science Theater 3000-worthy films of the present day, cult and b-movies have crawled out of the gutter and into the darkest part of our hearts. But here in Miami, subculture cinephines haven’t had a place to come together to share their love of on-screen kitsch.

Until now. Gutter Films has cooked up, in the tradition of mad scientists, a film series in Wynwood that promises to deliver the bizarre, creepy, and downright disturbing.

“I don’t know if it was the blood or sexuality that appealed to me or what, but it definitely stuck,” Joey Halegua, founder of Gutter Films, said of his first encounter with the genre.