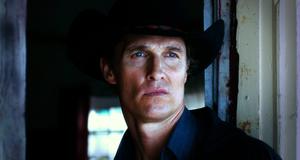 The only thing killer about “Killer Joe” is Matthew McConaughey, who summons one of the best performances of his checkered career in service of a trashy, despicable movie that fully earns its NC-17 rating. It’s yet another example of a playwright – in this case, a Tennessee Williams-wannabe named Tracy Letts – compensating for his utter lack of talent by mucking around the bottom of the barrel of human decency.
The guy is all about shock value, and little else, as he clumsily “crafts” a tale about Texas trailer park types going doublewide in their contempt for each other and their fellow man. There’s nothing funny, redeeming or interesting about anyone – except, possibly, McConaughey’s Joe Cooper, a corrupt Dallas detective with a drawl that oozes the sort of disarming charm that enables you to overlook his psychopathic tendencies. You see, Joe – irony of all ironies — moonlights as a hit man. He even wears a black cowboy hat to seal the bad guy deal.
Yes, Joe is a West Texas cliché in search of a bad B movie, a needless commodity that Letts and Oscar-winning director William Friedkin (“The French Connection”) are all too happy to fill in the name of … what? Art? It’s certainly not entertainment, because who wants to be amused by rampant misogyny (a woman forced at gunpoint to perform fellatio on a piece of fried chicken) and gratuitous violence (a person burned alive)? Oh, and did I mention this is a comedy? It’s more like a comedy of errors on the parts of Letts and Friedkin, who teamed 6 years ago on the equally insipid “Bug.” They get virtually nothing right, from the film’s uneven tone to the even more uneven performances by Emile Hirsch, Thomas Haden Church, Gina Gershon and Juno Temple, this week’s version of the “manic pixie dream girl.”
She plays dopey Dottie, a slutty virgin afflicted with what appears to be some form of brain damage. She longs for a man, but she’s not likely to find one living as she does in the squalid trailer she shares with her dimwitted daddy (Church) and blowsy, oft-naked stepmama (Gershon). Then there’s her irresponsible, drug-dealing brother, Chris (Hirsch), in hock up to his soon-to-be-wrung neck with the local mob. He needs cash and he needs it fast. And he figures the easiest way to get it is to hire Joe to off his mother so he and Dottie can claim the $50,000 insurance benefit. Problem is, Chris doesn’t have enough dough to cover Joe’s hefty down payment, so – like any good brother – he offers to prostitute the childlike Dottie to Joe instead.