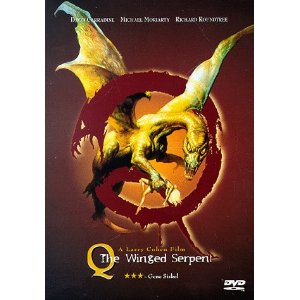 Q is a fun, low budget thriller from B-movie auteur Larry Cohen. The premise is that an ancient Mexican God Quetzalcoatl has taken the form of a giant flying serpent and is living somewhere in New York, feasting on unsuspecting residents. Sunbathers, window washers, high-rise construction workers are all fair game for this gigantic beast.
Michael Moriarity stars as Jimmy Quinn, an out of work piano man/small time criminal. It’s so weird seeing him in a role like this, as I am used to seeing him on the TV show Law & Order as an ADA. In this movie, his character stumbles on the secret location of the beast’s nest, and he tries to use that information to get money and the respect he thinks he deserves. While a criminal, I did feel a certain amount of sympathy for this character in the beginning, which evaporated rather slowly as the intoxication of power sets in, along with its’ illusions. In the beginning, he was just some poor schlub who couldn’t catch a break, but later on his true nature appeared. I read a quote once, I am not sure by who, that said something like ‘to really see what’s in a man’s heart, give him some power’.

David Carradine plays a detective who’s trying to solve a series of gruesome murders, and his investigation leads him into uncharted territories of the unknown. The deeper he gets, the more he butts heads with his supervisors, who would rather see things cleared up neatly and without any superstitious mumbo jumbo. Also look for Richard Roundtree, as Sergeant Powell, a cop wound a little too tight whose beliefs are based on what he can see and touch.

The actual creature does not get much screen time, but its’ presence is noticeable throughout the movie. I really enjoyed the storyline with Quinn, his tenuous relationship with his girlfriend (Candy Clark), and the manner in which he tries to use the vital information. Here’s a small time schnook, never had a break in his life, literally trips over something, sees nothing but the value to himself, and tries to get everything but ends up with nothing.

Here is another fine example of a filmmaker making a lot out of very little. The horror aspects of the movie are present, and the special effects are used sparingly, but the characters drive the story. Another example of this is the original Jaws movie. I suppose the special effects were kept to a minimum due to budgetary limitations, but it helped, rather than hindered, the movie. This movie also has a raw, gritty feel to it, in the sets, use of locations, dialogue, giving us an almost documentarian feel.

The movie is presented in a wide screen format, with good audio. A number of special features include commentary by the filmmaker, biographies, trailers, and promotional materials. All in all, not a bad way to spend 93 minutes.