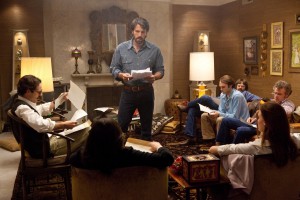 This is one movie that history buffs don’t want to miss. It’s based on true events that occurred during the Iranian revolution of 1979. In this story, now declassified, we find out that there are six Americans trapped inside a country experiencing violent protests. Of course, there is a CIA plan to get them out … and it sounds like a long shot.

So, what’s the plan? CIA Agent Tony Mendez (Ben Affleck, who also directed the film) proposes that they put together a team to make a fake movie. The team can then enter the country under the pretenses of trying to find an exotic filming location and then extract the six Americans. You’re probably wondering at this point what kind of movie would be a good match for the extreme desert conditions of Iran, right? Well, how about a science fiction film … Argo? Now you know where the film gets its title. Whether the plan succeeds or not, this movie looks like it has plenty of action, suspense, drama, and even a little humor thrown in for good measure. The bigger question is whether this will become the third successful directorial effort for Affleck. Check out the clip, the trailer, and the official synopsis below and see what you think. Don’t forget to sound off in the comments!
.