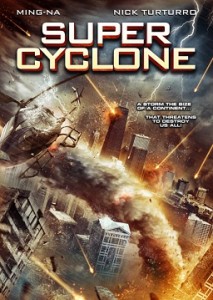 The Catalina Islands blow up, a Super Cyclone develops, and there’s an ocean floor volcanic eruption, all within the first four minutes.  That is one main reason I prefer B movies.  There are no lengthy setups, overkill information about characters, and drawn out endings.  Plus, even though the title is ‘Super Cyclone’ there’s a heck of a lot more going on in this movie which keeps the action consistent throughout.

‘Super Cyclone’ “When a super cyclone threatens the American seaboard, a lone meteorologist and a petroleum engineer must battle the elements to stop the threat.”

You can check out the trailer here: http://www.theasylum.cc/product.php?id=207

Before you even watch it definitely check out Darin Cooper’s interview http://wp.me/p27Hel-1cG who played Colonel Chadwick.

The movie begins on an oil rig.  Once again an oil rig is a big contributor to the disaster.  Just once I’d like to see a movie made where the oil rig is the hero.  The movie has a lot of action throughout, but of course there needs to be some drama and fortunately there wasn’t too much.  One was Travis (Nicholas Turturro) uncle who was injured in an explosion is being treated by the ship’s doctor on a metal counter down in the kitchen and falls asleep from exhaustion. Moments later the ship and passengers are tossed around by a massive wave, but they survive.   Uh, maybe someone should stop celebrating and go check on the uncle who was on a slippery table in the kitchen and wasn’t strapped down.  Spoiler, he’s okay. Dr. Sparks soon after says they have to stop the Super Cyclone or millions will die, I was very curious how writer/director Liz Adams was going to accomplish that goal.  She did well.

The remainder of the movie is Travis, Dr. Sparks, and Colonel Chadwick amongst other characters defying unnatural disasters that spawned from the super cyclone in order to save southern California (a few of which I had to chuckle at). Before I even popped in the DVD I knew what I was getting into regarding typical Asylum films and once you embrace their style, you’ll enjoy them a lot more.  Which goes for many other B movies.

Lastly there’s always a few times a character cracks me up and Dr. Flynn (Mitch Lerner) is the winner.  Dr. Flynn “It’s creating flaming hail” and when he quietly clears his throat to get the attention of Colonel Chadwick and tell him the dam breached and possibly two million people were wiped out. For the record it was a short fourteen minutes in when Ming-Na said the title.

If you have some thoughts to share about this article or you’d like to discuss B movies with other B movie fans and filmmakers please  visit our B Movie Nation Facebook group.