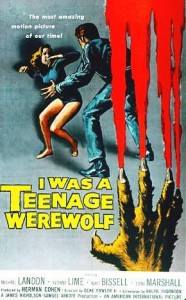 Michael Landon gives his hairiest performance as the troubled high school student Tony Rivers. Whit Bissell is the shrink who hypnotizes him and turns him into a raging lycanthrope. Yvonne Lime , who co-starred with Elvis the same year in Loving You, is Tony’s long-suffering and patient girlfriend. Tony’s “episodes” are not triggered by the full moon, but by stuff like someone bumping into him or getting a boner watching a sexy gymnast (Dawn Richards, whose parents were midgets!) You know, typical day to day stuff that may piss you off or turn you on, but won’t turn you into a drooling man-beast. This is Tony’s form of “release,” like  blowjobs for presidents. We all need to find a way to deal with tension in these modern times. In the ’50s, pyschotherapy was all the rage. They thought everything could be cured with therapy – whether it’s homicidal or homosexual in nature. People still think that. This experiment sort of backfired. But I had a lot of fun watching the plan go awry. This amazing little movie was filmed in less than a week by former Fritz Lang editor  Gene Fowler Jr., (also director of that other confessional B classic, I Married a Monster from Outer Space, 1958), and photographed by Joseph LaShelle, who also shot The Apartment and Laura among many other A-list classics. This is his masterpiece. It looks and feels like JD film noir. The memorable score by Paul Dunlap is appropriately moody. This was the first big drive-in hit for American International Pictures, revolutionizing the industry for decades to come. This is also the original “teen horror film,” successfully aimed directly at the make-out market. Originally this influential hybrid hit was co-billed with another personal fave, Invasion of the Saucer Men. It is currently unavailable on legit DVD due to b.s. rights issues. If you’re lucky you can still track down the official Columbia VHS release from 1991. What a drag. As Tony said, “People bug me.” –