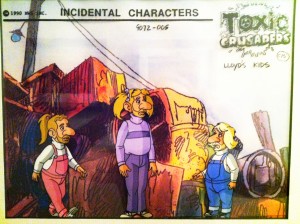 As we know Lloyd Kaufman is a legend for B movie horror and comedy horror.  Beyond that his wife Patricia is the executive director of the New York State Governor’s Office for Motion Picture and Television Development.

With all the awards and films Lloyd has made, his top award would have to be raising his three daughters with Pat; Lily Hayes, Lisbeth and Charlotte.  All three live away from each other, but they have a strong bond and be sure to always keep in touch.  Yes, the man surrounded by gore and sexy Tromettes biggest success was teaching his daughters good family values.  So, how was it for them growing up with a B movie legend?

There have been plenty of family vacations with Toxie.  What was your most memorable vacation that you may still give your father grief or laugh about today?

Hard to choose just one… we were really lucky to share so many Tromatic vacations as a family – that includes Toxie.   At any point, dad could disappear into a phone booth, a car, a men’s room, or just simply duck his head in a garbage can and reemerge as… THE TOXIC AVENGER!

In 2001, we took a family trip to The Cameroons in West Africa.  Our car broke down way up in the hills.  As soon as TOXIE appeared, we had no problem hitchhiking our way back to the abandoned house we were squatting in for a couple nights (Our hotel was overbooked) where we pushed a dresser against the door and slept on our suitcases on the floor.   Luckily, we always knew that TOXIE was there by our side to protect us.

Another favorite: The youngest of us spent a year living in Yemen the Arabian Peninsula.    Thoughtful Mom didn’t want her to miss out on Christmas, so when the whole family flew to Yemen to celebrate the holidays with her.  In the holiday spirit, Dad agreed to take his Toxie mask one step farther. He donned a full Santa Claus outfit,  (which was: black knee socks over his red long long pajamas and a fake beard with Santa hat) and surprised her (and her perplexed roommates) with a sack full of gifts.

Your father loves his fans and is passionate about his films.  I’m sure being his daughter you see a different person while he’s filming, can you tell us how it was being on the set with him growing up?

The public Lloyd Kaufman creates a fantasy world where nerdy superheroes mix with “Tromettes” who have little clothing but big…brains.  We were totally accustomed to bloody mutants, on-screen head crushing and projectile vomit.

Dad regularly broke child labor laws: he had us working 18 hour days as “actors” – for free, but unlike his real actors we were not allowed to eat until the whole crew had eaten, (including my pregnant mom) Being on set with Troma team we learned from some of our Troma heroes like:

Whilst Dad was exposing us to sex, violence and explosions of fake bodily fluids, MOM made sure we studied, didn’t eat candy, made it to ice skating lessons, she saw every single one of our ballet performances, and didn’t miss a single College visit.  We aren’t saying we’ll come out normal as adults, but any decency we do have is thanks to MOM!

How did it feel to have your dad kill you off in ‘Sgt. Kabukiman’ when you were just a little kid?

And yes, he sure did seem to enjoy killing us (fictionally):  running us through with samurai swords, blowing us up into trees, fake vomiting to a fatal end or through other creatively gruesome ways.

It wasn’t the blood and gore that was the issue, but when it’s the last shot of a late night, you have a mutant ear breaking out of your stomach, or maybe a glowering grunting man in a blond wig threatening you with a scary long knife, your dad is screaming and cursing about blowing his brains out if you don’t get the next shot, and there is a bikini clad woman squealing to your left, you know not to do it, you know you really shouldn’t, that it will ruin the scene and the cast and crew want to go home,  but you just can’t help yourself, there is a glimmer attracting your eye, your reflection perhaps, what is it, you know you shouldn’t but… YOU LOOK IN THE CAMERA, and BAM a regularLot’s wife, you freeze like a pillar of salt—‘CUT! Goddamit CUT!!! ‘ Dad yells, ‘WHY DID YOU LOOK IN THE BLOODY CAMERA?… let’s do it again!’ 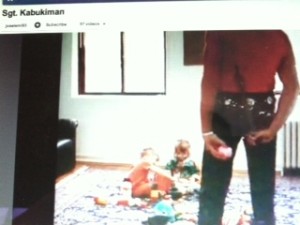 Are you actively involved with Troma and how?

No matter how much we beg, plead, and interview none of us has yet succeeded in breaking in to a real job at Troma, so we’re always looking for ways to get our foot in the door on odd Troma Jobs here and there like:

Hiring a Talented Duck (http://www.kickstarter.com/projects/852899646/troma-entertainment-return-to-nuke-em-high-ducksta/comments) to act in ‘Return To Nuke Em High’

Playing a mute, a mutant, or a vomiting fast food customer in a Troma Film.

We also recently pitched a LLOYD KAUFMAN segment to the Oddities show on The Science Network. His episode, ‘The Arsenic Avenger’ aired in Season 3.  Mike and Evan, from the Obscura store lent a hand (a mummified hand) to our pops in his search for the perfect Troma prop.

One day, maybe dad will hire us to officially work with him at Troma.  Until then, as the wise old Senegalese proverb goes… “Slowly Slowly Catch the Monkey”

What are you up to today and how did your parents influence you?

Our blog TROMEMOIR,  (www.tromemoir.wordpress.com) is a sort of test kitchen for gruesome and frightening memories of our Tromatic childhood growing up in the shadow of The Toxic Avenger.  We’ve had a lot of help from Pops, the Troma Team and Troma fans*, including some guest writers and amazing artists.  One day maybe we will pitch the whole story to pops… a different kind of family movie – TROMA style?

We always love Troma fan Tromemories, if you have one you’d like to share shoot us an email:  tromemoir@gmail.com

Tromemoir has a ton of great stories so definitely visit their blog and say hi.