Using breakthrough flesh-regeneration technology, a biotech firm creates a set of living dinosaurs. But when the creatures escape their museum exhibit and terrorize Los Angeles, a former firefighter must rescue his teenage daughter from the chaos brought on by the Age of Dinosaurs.

“Age of Dinosaurs” was written by Hank Woon Jr.  This is Hank’s third produced film of 2013.  His other two screenplays were “500 MPH Storm,” and “From the Sea”.

Directed by Joseph J. Lawson, which is his third feature he directed for The Asylum.  As we know, Joe also is a Visual Effects Supervisor who worked on dozens of feature films.   How would it be for him to direct the visual effects team?  Joe shares that experience, and the technical details of the film.

Being the VFX Supervisor makes it easier in most ways 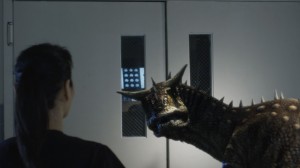 to achieve a directorial vision. I’m also hyper-organized as a director from the beginning with an eye toward post so if I do BOTH jobs well enough, the end product… I hope… is better for it. My biggest challenge is to not overburden the team with shots because I KNOW what is possible… so I’ll tend to take on a harder or larger load myself since I know just how hard our teams work already. I don’t get any special dispensation for the shows, even my own.

It’s absolutely a team effort in the VFX department because we had a LOT going on at the same time, it was a smaller team (and required more ringers) than usual. Ken Brilliant was the dino modeler and once again knocked it out of the park for creatures. Dan Peters in Iowa and Steve Clarke (with Paul Knott assisting) did animation duties with a little pitch in at the end from John Karner up in San Francisco. We also had Sasha Burrow and Aaron Witlin animating and doing VFX work here then Aine Graham and Derek Serra doing compositing duties. A special kudos out to our coordinator Sandell Stangl who not only was creating plates then sending finals to editorial for Dinos but also was doing the same for 100 Degrees Below Zero and SyFy’s Battledogs at the same time! He handles upwards of 500 shots in a month and still keeps his cool AND friendly demeanor. That’s a true pro. 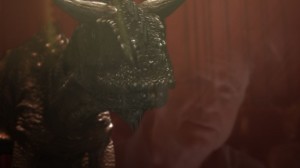 As with all creature and disaster films, there’s a huge challenge of accomplishing a final product that engages and impresses the audience.   Very enthusiastic and passionate about his films, Joe shared some valuable information about the equipment and technology used for “Age of Dinosaurs.”

EQUIPMENT (by Joseph J. Lawson)
Equipment-wise on set, cinematographer Richard Vialet and I tried something ambitious on this show… we had a single Red Epic (the kind of camera used on Ridley Scott’s “Prometheus”) so we elected to use the same settings that they did (for the tech set: 5K imaging at 24 fps with compression level 5 for live action, compression level 3 for VFX shots). It helps make the VFX a little more crisp and holds fidelity… it also takes up a TON more drive space so I’m certain the producers would prefer we stick to 4K in the future. 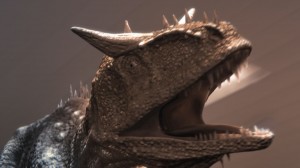 SOFTWARE (by Joseph J. Lawson)
We use Lightwave 3D (now up to 11.5 and whoa nelly some amazing stuff in there) for our VFX and are quite happy with it. Honestly, Lightwave’s STILL the best/fastest tool around for fast production on a budget and a generalist doing everything approach. As a house, we’re starting to incorporate other tools in our workflow and have licenses of almost every major software out there (Maya, Max, Softimage, Vue, Realflow). Though we’ve been upping the quality on our films over the last three years I think folks will see that trend continue even further with Age of Dinosaurs and future films. We still work fast and that makes it a challenge but I think we continue to learn new and better/faster ways to get to the finish line on time. Faster machines help as well and the producers at the Asylum have been INCREDIBLY supportive in providing all the right tools to achieve the quality they desire. 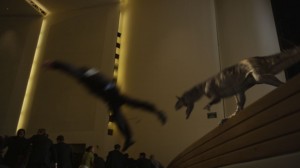 Joe is constantly working on films whether directing or special effects and obviously doesn’t get much time off.
The biggest challenge was going into Dinos so SOON after Clash of the Empires… there wasn’t a lot of down time or prep time so I was winging it more than I’m used to. I was able to rely on the crew because they all had the same vision: the best dinosaur film we could make with a very distinct style and approach in honor of our favorite recent huge budget dinosaur franchise. Except we had to shoot ours in 15 days and post it in two months. That feeling carried through from start to finish including the great soundtrack by Chris Ridenhour. Now that it’s done, I’ll think of it as my directing audition for JP5 (hint hint). 😉 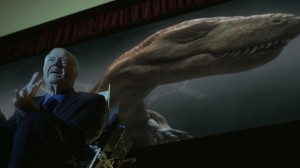 Lastly, a summary of the overall experience.
All in all, Age of Dinosaurs was a fun and challenging shoot. We had a great, motivated team on set and everyone’s really been enthusiastic during post right down to Michael Hardman and Lisa Ries coming up with new dinosaur roars and sounds (I even got to do a few of them myself!).

The shoot was, as always, a learning experience for me especially getting to work with two seasoned and iconic pros like Treat Williams and Ronny Cox. They both gave their all to the story and brought both humor and class to the proceedings. Jillian Rose Reed was not only absolutely committed but brought the right talent and vibe to her character. It was an absolute joy watching Treat and Jillian ad lib some of their father-daughter bonding moments in the car at the start of the film. She’s got talent and had to hold her own with Treat and Ronny. Mission accomplished with style!

A huge thank you to Joe for sharing all this insightful information.  Mark your calendars for May 7, 2013 the release date of Joe’s “Age of Dinosaurs”.  For the trailer and more information go to the Asylum’s website and IMDB.

0 108
Mutant Vampire Zombies from the ‘Hood!

0 81
The Spotlight is on Sara Malakul Lane

0 56
The Death Of The Multiplex