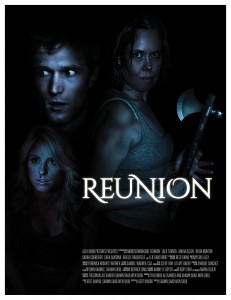 B Movie Nation’s Maria Olsen and her production company MOnsterworks66,  along with ACH Reunion are currently filming a new horror/thriller due out in 2013.

Plot Outline:  Trapped in his home, an ex-rock star who’s haunted by demons from his past must save himself and his estranged girlfriend from one of his possible ex-lovers who’s convinced he kidnapped her child.

Reunion is an independent thriller/horror film spearheaded by a diverse team of professional industry veterans.

It’s a cold, stormy and thunderous night.  Trapped in his own home, former rock stars Brad Norton and Grant Foley prepare for the return of their infamous band when a strange woman, Mia, shows up at their door looking for her son she calls “Alan.” Unbeknownst to them, she is guided by a dark spirit and is convinced Brad kidnapped her long-lost son.

The filmmakers have assembled an experienced crew from Emmy-award winning TV shows, studios such as Lionsgate, and feature films such as “Pirates of the Caribbean,” “Star Trek: Into Darkness,” and “The Dark Knight.”  Starting with a rock solid screenplay written by Bert Havird and led by Producer Thelonius Alexander and Director Shawn Chou, the philosophy of the filmmakers was to look for undiscovered talent that wouldn’t break the bank.  After laboring through months of casting, they recruited talented up-and-coming actors Sarah Schreiber, Cara Santana, Reign Morton, Arielle Brachfeld and Leif Gantvoort.  The independent movie also features a young heartthrob Jack Turner in his debut as well as veteran actor-producer Maria Olsen, who plays Mia, who is best known for her role as Mrs Dodds/The Fury in Fox’s “Percy Jackson & The Olympians: The Lightning Thief”.

“We rely on our team’s passion and dedication to bring our vision to life,” says Shawn.  “The most important thing is to tell a story about a ghost who tries to reunite his lookalike twin with this mysterious murderer.  It’s filled with twists and turns. Ultimately, we ask tough questions about why people repress their memories to cope with life.”

Jack adds, “It’s an incredibly interesting relationship to investigate with all its myriad complexities, amnesia, abuse and sexual tensions, and Maria is wonderful to act with.”

The film has plans for theatrical distribution and aims to break new boundaries in the thriller/horror genre.  And why not?  They have a great script, cast, crew, and an established formula in place.  Join Team Reunion on their journey.

Reunion is raising $75,000 on Indiegogo, search for Reunion 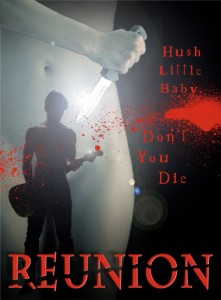