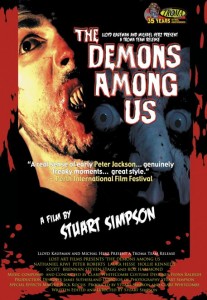 If David Lynch teamed with George Romero to make a zombie movie – in Australia – it might look something like Stuart Simpson’s hallucinatory horror classic THE DEMONS AMONG US. Something supernatural and sinister is turning the family next door into ravenous, demonic, flesh-eating ghouls, and apparently, there is no escape from the sudden slaughter…a riveting mixture of dreamy imagery, brilliant editing, brutal carnage and dark wit, this is one deeply disturbing nightmare from Down Under. And we thought Peter Jackson was crazy! Starring Scott Brennan, Chris Gay, Roz Hammond, Laura Hesse, Maree Kelly, Holly Kennedy, Peter Roberts, and Michael Russo.