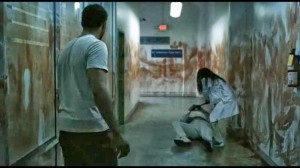 Written and directed by James Cullen Bressack who brought us “Hate Crime,” “To Jennifer,” and “My Pure Joy.”  Knowing and enjoying James’ style, I anticipated a lot of insane moments and he didn’t let me down.

“For millennia, calendars have added an extra day every four years. In doing so, they have violated the ancient Mayan calendar. Now, we are in the 13th month of the 13th year of the new millennium, and the few who survive will battle a world of demons.”  The demons basically have infected almost everyone and turned them into crazies.  The infected are insane killing machines, but they’re alive and not zombies.

The sky was the limit for James to go ballistic and he sure did.  Horror movies like this are typically slash em up, but James added some fun characters to make the movie even more enjoyable and you may even snicker during some disturbing scenes.

It begins with us meeting the guys on a camping trip.  When Jack (Trae Ireland) returns from the trip everything appears normal…..sort of.  His twelve year old daughter Kendra (Tiffany Martinez) smashes a spider in her hands and eats it.  His wife Marcy (Calico Cooper) is compulsively scratching all the skin off her arm.  Jack takes her the hospital and experiences the doctors acting all hard ass dropping F bombs left and right on him. Meanwhile back home, his daughter is in a heated and distressing argument with Jack’s friend Trevor (Bill Voorhees).    Spoiler, Kendra wins. 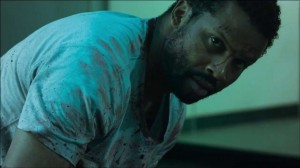 It’s pretty whacky and disturbing in many ways and I have to admit funny at points.  Simple things, for example, Quentin (Jody Barton) and Joe (J. Scott) are sitting on the couch drinking beer and you can hear crunching of Trevor’s head being smashed on the concrete outside by Kendra, all while Quentin and Joe zone out watching TV.  In one scene Quentin stabs Joe and they laugh as if they smoked a pound of marijuana, and then laugh even harder when they smear his blood on the wall.  Quentin and Joe definitely are the Beavis and Butthead of psycho killers. Jack and Candace (Erin Coker) are the only sane people and meet in the hospital while the world around them is full of crazies.  They team up to escape the hospital and get to Jack’s house to save his daughter.  Yeah, the daughter who eats
spiders and smashed a guy’s head on the concrete. On the DVD be sure to check out the bonus features which includes a “Making Of” and “Gag Reel.”