As far as family-oriented fantasy kitsch goes, The Golden Voyage of Sinbad is pretty ridiculous stuff. But those with a soft spot for this ‘70s relic will be thrilled with boutique label Twilight Time’s limited edition Blu-ray release. Directed on a shoestring budget by Gordon Hessler, this 1973 adventure flick has the distinction of having been awarded the first-ever Saturn Award for Best Fantasy Film. More importantly, the late visual effects genius Ray Harryhausen (who passed away at age 92 on May 7, 2013) handled all the stop-motion model animation. Though dated by today’s digital standards, there’s still a palpable sense of wonder in watching various creatures and inanimate objects

Even the most jaded of today’s youngsters may find themselves mystified by these sights.

I’ll tell you what sight knocked me out: 24-year-old Caroline Munro (The Spy Who Loved Me) running around as the former slave-girl Margiana. If only this movie hadn’t been G-rated, my Lord! Our dashing hero Sinbad (John Phillip Law) buys Margiana in order to set her free, something the normally submissive lady has to get used to. Sinbad actually envisioned her in a prophetic dream, right before embarking on a quest to find the Fountain of Destiny on the lost continent of Lemuria. Sinbad teams with the masked Grand Vizier of Marabia (Douglas Wilmer), each of whom possesses an amulet needed to obtain the correct directions to Lemuria. The roadblock is Prince Koura (Tom Baker, best known as the fourth Doctor Who), a mystical madman who wants to obtain their two amulets in order to get to the Fountain first. 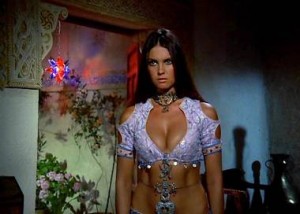 Whether the fault of Hessler’s director, Brian Clemens’ screenplay, Roy Watts’ editing, or a combination of factors, the storytelling isn’t up to snuff. The plotting is terribly convoluted and the characters, however enthusiastically played, are all paper thin. The whole enterprise has the depth of a Saturday morning cartoon, so Harryhausen’s special effects sequences easily steal the show. Sinbad battles a centaur at one point and fends off a wooden figurehead from the front of his ship at another. These and other effects sequences easily highlight the film. That the whole thing achieves a convincingly epic feel is a huge credit to Harryhausen’s work, as well as that of cinematographer Ted Moore. There’s always something cool to look at in Golden Voyage, even if the viewer must disengage his brain in order to enjoy it.

The Blu-ray presentation is, quite frankly, superb. So much multi-layered optical effects work went into this film, there’s no shortage of inevitable visual artifacts. The 1080p transfer accurately preserves those inherent flaws, while also offering the crispest imaginable rendering of Moore cinematography. Non-effects shots are stunningly detailed (which, speaking of stunning, is quite wonderful whenever Ms. Munro is onscreen). The Vizier’s old-age makeup is captured in a great detail, allowing us to really appreciate the level of production value invested in an otherwise silly fantasy romp. 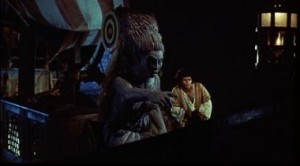 Unfortunately Golden Voyage’s original mono mix is nowhere to be found, but the lossless DTS-HD Master Audio 5.1 remix is good enough that most viewers will be happy anyway. Miklós Rózsa’s soaring score sounds fantastic and is well placed within the stereo spectrum. The heaviest action-oriented scenes, as well as Sinbad’s early prophetic nightmare sequence, make good use of the surround channels without ever resorting to overkill. It’s a very solid audio presentation.

While not extras-heavy, Twilight Time’s Blu-ray includes a trio of Ray Harryhausen-oriented, standard definition featurettes that run for a total of 30 minutes. Carrying on a long-established Twilight Time tradition, Rózsa’s score is included here as a lossless isolated track. Rounding out the supplements is the film’s original theatrical trailer. 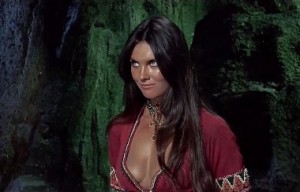 Visit Screen Archives for ordering information. The Golden Voyage of Sinbad has a strictly limited pressing of 3,000 copies. Twilight Time has imposed a “one copy per customer” limit. Sinbad and Ray Harryhausen fans take note: also available on Blu-ray from Twilight Time is the 1977 Sinbad and the Eye of the Tiger.