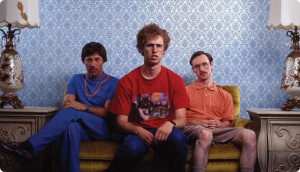 There is something about working and living in London right now that can really get on one’s nerves. Everyone is moaning about the economy and the shortage of money. Then the new government abruptly shut down the UK Film Council.

On top of that the weather really sucks in London.

But do you know what? There couldn’t be a better time to try and launch your screenwriting and filmmaking career.

Recessions – like all abrupt social changes, create vacuums. The old order gets swept away with all to the dead wood, priming our civilisation, and our film industry for regeneration.

If you have new ideas, if you have vision, and if you have passion and drive, there really has never been a better time to create, write, direct and produce your movie.
Here are some uplifting articles to get you inspired:
1. What’s Low Budget?

This feature film was made for literally nothing, premiered at the Cannes Film Market in 2009, and ended up getting distribution in over a dozen countries.
The Story of Colin The Movie
3. My Personal 10 Favourite Low Budget Movies

This list of my favourites changes all the time, but here is my current favourite low budget films
4. In Praise of Low Budget Films

Low budget may be the name of the game, but it doesn’t mean you have to make them with shaky camera movements. Here are the qualities you can hate to love about low budget films

Will Buckingham, one of our amazing interns, put together a list of his 25 favourite low budget films. I really had no idea there were so many! Check out his list of 25 Low Budget Films.
6. Writing For Zero Budget

Maybe a way to approach the recession and the incredible shortage of funds, is to start with a zero budget.
7. Steps To Low Budget Success

Success in anyhting is far from easy. Sometimes – just seeing how others have done it can give you a yardstick of where you can major with your own career. The 5 Steps To Low Budget Success.
8.10 No Budget Shooting Tips

Here is filmmaking gear you can get from your local hardware store and DIY Film Equipment.
9. Directing Low Budget

You didn’t get the gerar and crew you thought you needed, and the movie is starting tomorrow, and you have decided to direct. What to now?
In Praise of Low Budget Film Directing
10. What About The Software?

You’ve managed to get your hands on a new computer, but are so broke you can’t get any software. Here is how you can get nearly £6,000 of software completely free. And legal.
The Zero Budget Software Guide

0 236
The Spotlight Shines on Daemon Hillin