A pair of scribes find themselves on the run from a hunting party in this sweaty jungle thriller adapted from Richard Connell’s famous story, “The Most Dangerous Game.” 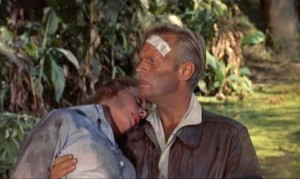 Connell was a born writer. His dad owned a paper, so he got his start covering baseball games when he was all of 10. Six years later, he was editing the paper. He penned short stories as an adult that often appeared in Collier’s Magazine. Many of his tales were adapted for television, but “Game” was the most popular. The original yarn had a sailor washed ashore onto a remote island where the chief resident enjoyed nursing his victims back to health before giving them a run for it while he pursued with handlers and dogs. 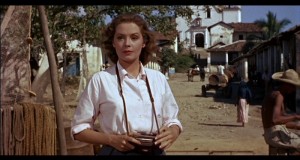 This version of the story is quite different. It starts with a reporter, for “Sight Magazine” (a thinly disguised version of Look), named Katie Connors, landing in Mexico and hiring a driver to take her to a remote fishing village. There she spots her prey, a writer (seemingly based on Ernest Hemingway) who disappeared after conquering the bestseller list. His name is Latimer and she is there to get his story.

Making friends with the only other American in the village is a piece of cake, and she soon has him eating it out of her hand. Latimer starts with the small stuff by confessing that he travels around with a bullet that bears his name. It goes back to the war and was in a gun that was pointed at him and jammed. He reveals that he imposed his own exile after finding out his wife had cheated on him. This revelation makes Katie like him all the more, we already know she likes his books, and she is determined to get him writing again. Unfortunately, she has a deadline and must head back.

Latimer opts to fly her to Mexico City. He asks that she provide her address so they can get together in the future, and she boldly writes down the Magazine’s information, but Latimer stuffs the information in his pocket before reading it. We all know he’ll find it later, but a little melodrama is always welcome in a formula flick. Then they get thrown off course and are forced to land in the jungle. Latimer is injured, but help arrives. 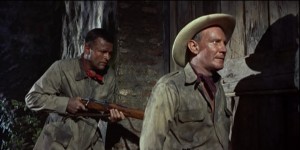 Turns out, they have set down in a remote region. Their hosts are an Englishman named Browne and his Dutch friend Van Anders. They learn that getting out will take time and there are no phones in the compound where these oddballs live (alongside petrified natives who are kept in line by Browne’s hunting dogs). The radio broadcasts news of their disappearance and Latimer learns that his companion was writing about him. He isn’t pleased but soon realizes they need to table their differences. Turns out, their host is an ex-English diplomat who married a German woman and resigned his post so he could become a wartime DJ imploring England to get out of the conflict. His Dutch friend is really his Nazi brother in-law and the two are in hiding and wanted for war crimes.

Latimer and Connors make a break for it but they have only a machete and a 10-minute head start before their captors come after them The resulting chase takes up the final 40 minutes and is beautifully rendered in widescreen and Technicolor. Cleverness plays a big part in their plan. Latimer uses all of the research that went into his He-Man stories to set traps and buy them time so they can double back to the camp and steal Browne’s own airplane. It’s a very close race and the bullet that decides their fate may have Latimer’s name on it.

This is rousing stuff, thanks to top notch production values. It wasn’t often that the studios employed a big budget on a genre flick and A-list stars to boot. The popularity of drive-in fare probably went into the math here, so you get that rare instance of a B-movie with a respectable pool of talent.

The chief star here is Richard Widmark. His Latimer is brooding at first but this adventure fires his passions and it is obvious the character will write again. Jane Greer is Katie and it is a good bit of stunt casting. She was primarily known for playing bad film noir girls in films like “Out of the Past.” Here, she lights up the screen in one of her few color films. Trevor Howard is restrained as the villain, Browne. He comes off as a man who is tired and regretful of the poor choices that have doomed him to waiting to die in a jungle hell. Well done and good fun, despite the dark subject matter. 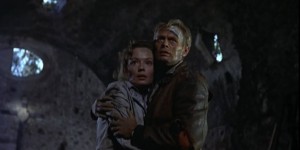 Bets line: “He’s made the mistake of taking the girl. They’ll leave a trail a child could find.”