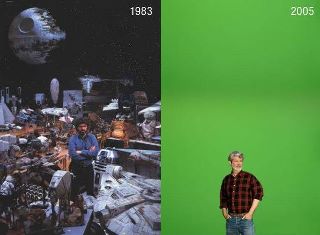 Greetings, my dears. As William Bibbiani is out of town this weekend (the lucky schmo is hobnobbing with attractive porn stars in Las Vegas), I, Witney Seibold, will be taking up sole reigns of B-Movies Extended this week, wherein I shall be commenting on the latest episode of The B-Movies Podcast (which is now a stately 51 episodes young). Seeing as I get to choose the subject of this week’s article, I have decided to offer my own input on the recent news (covered on the both the podcast and on the CraveOnline website) of the somewhat controversial and noteworthy announcement that George Lucas, the famed (and often infamous) figure behind the Star Wars movies, is going to stop making high-profile big-budget movies.

Star Wars is, of course, probably one of the single most popular films of all time. I don’t need to point that out to any of you, as you could probably recite more than one of the Star Wars films from memory.

George Lucas worked very hard in the late 1970s to bring his ramped-up version of Flash Gordon to audiences, and the impact of the film could not have been predicted by anyone. This was no mere blockbuster. The film changed the way we make movies. Underground genre films began to fade, and blockbuster thinking was the new world of the day. Thanks to Star Wars (and also to Jaws) films became nationwide releases. (It should be remembered that pre-1972, films typically toured the country, city-by-city.) I have a feeling no one was more surprised and astonished by the success of Star Wars than George Lucas himself.

Lucas made gazillions of dollars. He started his own special effects studio. He moved onto a ritzy ranch. He opened a sound laboratory. An entire generation came to worship the man as the driving creative force behind the single feature film that altered their childhoods.

I don’t need to point out the controversy either. I should, perhaps, just point you to a recent documentary film called The People vs. George Lucas (directed by Alexandre O. Philippe), which covers – in rather excruciating detail – the way fans came to feel hurt and disillusioned by Lucas’ tinkering with his original product. He erased many of the original special effects in Star Wars, for one, and replaced them with newer digital effects. He insisted that the newer versions were better, and seemed to go out of his way to force the original home video versions off the market. Then he made three Star Wars prequels which are largely maligned by most fans and critics.

Lucas has really taken it on the chin these days. Even the most faithful of his fans have, at best, a kind of lingering ambivalence toward him. At worst, well, you have people like Mike Stoklasa and Jay Bauman over at Red Letter Media giving incredibly long and detailed explanations as to why the newer of the Star Wars films are bad. Star Wars fans have never been a quiet or humble bunch, so they have made their dissatisfaction with Lucas’ recent output very, very vocal. Lucas has, as any true believer should, stuck to his guns, however, and kept his point of view. He believes in his new versions, and keeps on marketing them to the extent of his abilities. His most recent announcement has been a re-release of his 1999 Star Wars film The Phantom Menace, retrofitted for 3-D. On The B-Movies Podcast, I myself cynically put it this way (and I paraphrase): “A film that is widely hated by both fans and critics is going to be altered in a way that will make it uglier and more difficult to bear.”

So what’s a filmmaking entrepreneur to do? Lucas has announced the only logical thing he can do in such a situation. He’s going to retire from Star Wars, at least in movie form. After years of pushing and pushing, the man is finally backing down. He put it this way: “Why would I make any more when everybody yells at you all the time and says what a terrible person you are?” Lucas is finally giving the fans exactly what they want by not giving them anything at all. If any future Star Wars films ever get made, Lucas will likely sign them over to others.

In The People vs. George Lucas, a person no less than Francis Ford Coppola lamented Lucas’ career trajectory. He, Coppola, Scorsese, and Spielberg were a new guard of film-school educated filmmakers whose brand of super-slick and daring blockbusters changed a decade of movies, and altered the way we look at the medium. Lucas’s sci-fi film was supposed to be a way of him expressing enthusiasm over his favorite afternoon movie serials. It became a juggernaut so powerful that Lucas got swept up in the furor. Rather than let Star Wars exist as a mere film, he became the handler of an out-of-control marketing beast that he never intended to create. As a result, Coppola hypothesized, Lucas the filmmaker vanished. He still loved film technology, and was careful to let other filmmakers use his studios for their special effects, but Lucas has not made an original film for decades, staying close to his Star Wars wrangling.

I feel kind of bad for giving a negative review to his recent producing effort Red Tails, a slickly-made and paper-thin look at the Tuskegee Airmen. This was Lucas, again, trying to bring the boldly rock-stupid serials he grew up on back to life. I appreciate his love for these old serials, and his need to update them for modern audiences (I still love Raiders of the Lost Ark), but Lucas seems to see himself as a corn-obsessed blockbuster machine. He seems to feel that he can only make a certain kind of film. This is, of course, kind of limiting as an artist.

Lucas announced that, should he direct any more movies, they’ll be experimental art-house films. To this I say: Hurrah. Good show. I want to see the man come back. The Star Wars machine has become less of a movie, and more a bloated, drunken elephant that seems to overshadow just about everything in popular culture. Go to the San Diego Comic Con sometime. You’ll see the Star Wars costumes out in full force. It’s become so ubiquitous that people seem to forget that there was a 1977 feature film in there at some point. How nice, then, that a filmmaker should announce that he’ll start making, well, films again. Not a new version of pop culture. Not fan service. Not an extension of what he’s been doing for decades. Real, new, original films.