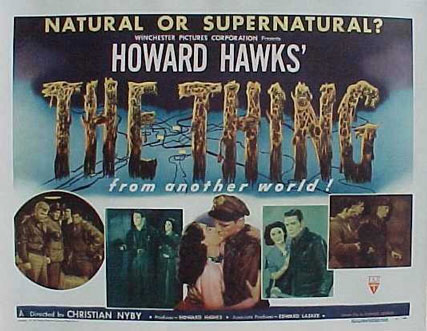 The scene is a distant Arctic missile base, where a UFO has crashed. The investigating scientists discover that the circular craft has melted its way into the ice, which has frozen up again. While attempting to recover the ship, Captain Patrick Hendry (Kenneth Tobey) accidently explodes the vessel, but the pilot—at least, what seems to be the pilot—remains frozen in a block of ice. The body is taken to base headquarters, where it is inadvertently thawed out by an electric blanket. The alien attacks the soldier guarding him and escapes into the snowy wastes. An attack dog rips off the alien’s arm, whereupon Dr. Carrington (Robert Cornthwaite) discerns that “The Thing” is not animal but vegetable, subsisting on blood. While the misguided Carrington attempts to spawn baby “Things” with the severed arm, the parent creature wreaks murderous havoc all over the base. Female scientist Nikki (Margaret Sheridan) suggests that the best way to destroy a vegetable is to cook it. Over the protests of Carrington, who wants to reason with the “visitor” (a very foolhardy notion, as it turns out), the soldiers devise a devious method for stopping The Thing once and for all. This oversimplification of The Thing does not do full justice to the overall mood and tension of the piece, nor does it convey the lifelike “business as usual” approach taken by the residents of the military base in dealing with something beyond their understanding. A superior lend of science-fiction, horror, naturalistic dialogue and flesh-and-blood characterizations, The Thing is a model of its kind.

Although Christian Nyby is officially credited as director, there can be little question in anyone’s mind but that ‘producer’ Howard Hawks is primarily responsible. … Based on ‘Who Goes There?’, a terrific short story by John W. Campbell (writing as Don A. Stuart), it deals with an isolated group of scientists threatened by the malevolent, extra-terrestrial vegetable they thaw out of the Antarctic permafrost. (Actually, the film gives the scientists a better break than the story; in the original, the monster was telepathic, while in the film it’s merely strong.) Lightning pacing, overlapping dialogue, and a concentration on group dynamics (all the Hawksian trademarks, in short) work to make this a guaranteed edge-of-your-seat thriller. The scene where the scientists spread out on the ice to mark the outlines of a buried spaceship, and form a perfect circle, is one of the most chilling moments in cinema — and worth the price of admission alone. James Arness plays The Thing.

One of the greatest science-fiction films ever made, THE THING FROM ANOTHER WORLD was produced by Howard Hawks and supposedly directed by his editor on RED RIVER, Christian Nyby. Anyone familiar with Hawks’s films will immediately recognize that the director’s style, themes, and handling of actors dominate THE THING and that Nyby’s participation was that of an apprentice observing the master. […]
THE THING was based rather loosely on a science-fiction story by John W. Campbell, Jr. (it was first published under his pseudonym, Don A. Stuart), in which the alien had the ability to change its shape at will, causing havoc among the soldiers who begin to suspect each other of harboring the monster (John Carpenter’s remake of THE THING in 1982 stuck closer to this story line but the film turned out to be a massive disappointment). Lederer’s screenplay (rumor has it that frequent Lederer-Hawks collaborator Ben Hecht had a hand in it as well) streamlines the narrative and allows Hawks to concentrate on the human interaction in the face of crisis. Where the original story (and Carpenter’s remake) is a study of paranoia among comrades, Hawks’s film revels in the interworkings of a hardened group of professionals capable of handling any crisis if they stick together. Tobey is the leader of the group and the star of the film, but the characters operate as an ensemble and no one is really given much solo screen time. Their unity is what the film is about (with the point beautifully emphasized visually when they assemble to make the circle on the ice), and anyone familiar with Hawks’s work will know that it is a theme that runs throughout most of his films.
While the film is frequently stunning on a visual level, THE THING is a symphony for the ears as well, with Hawks’s patented overlapping dialog, with the protagonists snappily going about their work, asking each other questions, and providing quick, succinct responses. Whereas it is the very nature of the science-fiction film to be filled with long, ponderous explanations of the rather incredible things presented, Hawks manages to handle the same material in a wholly realistic and entertaining manner sprinkled with doses of light humor. THE THING also draws the line that would mark most science-fiction films of the 1950s—the conflict between the military and science. Although Cornthwaite is shown in a bad light, Hawks still has compassion for the character. Cornthwaite believes the invader to be a superior being and is sympathetic to it because he sees it as an extension of himself—high intellect devoid of emotion, feeling, or pain, the perfect scientist (although the viewer sees it as a violent, rampaging monster that demonstrates little intelligence, only strong survival instincts). The scientist’s intentions are valid and noble—of course, studying the thing would yield valuable information–but his intellectual concerns begin to take over his rational sensibilities and lives are lost because of it. Hawks is a much more practical man–sometimes the price of knowledge is too high. If the survival of the group is threatened, the choice is clear: the group (i.e., society) must survive.
In a genre where elaborate special effects are required (and expected), THE THING is sweet simplicity. As in a horror film, the monster (played by James Arness who would later be Sheriff Matt Dillon in TV’s “Gunsmoke”) is only glimpsed in shadows and darkness, thus making the imagination fill in the terrifying details. Harlan’s cinematography and Tiomkin’s eerie electronic score (he used a theremin) provide enough chills to satisfy any horror fan. No ray-guns, strange costumes, or futuristic inventions are needed here; even the spaceship is only suggested, never seen. The fact that the alien closely resembles a man heightens the sense of personal (human) struggle that is a cornerstone of all good drama.
Those who still doubt that this is Hawks’s film need only look at production stills that show Hawks very much in control of the actors and examine Nyby’s directorial filmography. There was a five-year gap between THE THING and Nyby’s next film, HELL ON DEVIL’S ISLAND, which is odd for a “hot” director (THE THING garnered critical raves and was a big hit at the box office). None of Nyby’s subsequent films even came close to the brilliance of THE THING, leaving one to assume that Hawks granted his friend Nyby directorial credit as a favor so that the editor could begin a new career.