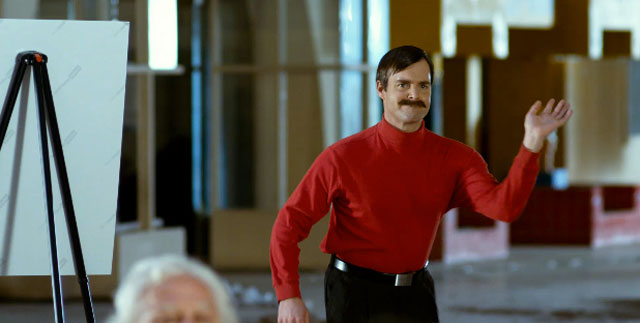 At the recent Tim and Eric’s Billion Dollar Movie screening in Atlanta, home of Cartoon Network’s Adult Swim, an audience member asked the comedy duo of Tim Heidecker and Eric Wareheim, “Are you guys best friends in real life?” Eric replied, “I see Tim more than Tim sees his wife.” Tim paused for effect and said, “Yeah … but my wife lives in South Africa.” Actually, she doesn’t. He spread his hands and gave a shrug.

Such is the comedy of Tim and Eric. Everything is a challenge, either to you (can you hang?) or to the concept of comedy itself. A longstanding rule in improv is that you never say “no” — you never stop a joke or a routine before it can start. Tim and Eric say “no” all the time, and their brand of anti-humor rises like a creepy, drooling, two-headed phoenix from the ashes of standard comedic practice.

In just a few short years — the duo moved on from their Adult Swim debut Tom Goes to the Mayor to Tim and Eric Awesome Show Great Job! in 2007 — Heidecker and Wareheim have gone from obscure Philly boys to household names among the ever-expanding hipster demographic. But they’re not just for kids sporting jorts and fixie bikes. Since the beginning, major Hollywood talents have supported Tim and Eric, whether contributing writing (Bob Odenkirk, Zach Galifianakis), guest shots (John C. Reilly, Paul Rudd), musical collaborations (Aimee Mann, MGMT) or overall support (Fred Armisen, Will Ferrell and Funny or Die). They could certainly attain broader success, but Tim and Eric haven’t been anyone’s little secret for over a decade.

Tim and Eric’s Billion Dollar Movie probably won’t win any converts, but it won’t drive away the faithful either. OK, so they added some exotica — plot, a semblance of coherence, continuity. But unlike the flash-in-the-pan viral one-offs that pass for comedy now, the team is undeniably steadfast: The movie means to make as many people hold their stomachs as their sides. The stars don’t seem concerned whether their surreal, high-concept psychotropic wit ever becomes the mainstream’s cup of mushroom tea.

The show’s high-risk humor combines actors who are barely actors — Tim reckons they’ve “Taft-Hartley-ed” more non-pros than anyone else in showbiz — with nods to ’80s pop culture, public-access television, the strange/sad bizarro world that is fringe-dweller Hollywood, and unflattering depictions of the team (who are actually handsome). The mix makes for uniquely discomforting comedy, and that’s even before factoring in the duo’s fascination with failure — in speaking, in social interactions, in technological obsolescence.

All that is present in B$M, their first feature, which tells the story of two Hollywood hotshots who lose everything and try to get back on their feet by reopening a condemned mall in the middle of nowhere. Hunted by their former financier (Robert Loggia) aaaaand by a wolf (don’t ask), Tim and Eric enter a world of strange shopkeepers, even stranger wares, and a very sick man-boy named Taquito (Reilly). That’s the elevator pitch, and a good one — but it’s only the beginning. With Tim and Eric, the devil is in the awkward details.

While Eric is often the luridly supportive “yes, and …” straight man, Tim offers a parade of slightly exaggerated expressions that make a mockery of acting-class technique, coupled with dialogue too perfectly dada not to have been overheard someplace. For all their popular “technical difficulty” production and seriously catchy musical bits — both of which made it to the movie — it’s their comedic linguistics that really set them apart. Terms like “shrim” and “Schlaaang” and names like “Reggie Pish” and “Dr. Doone Struts” don’t just revel in the giddy pleasure of goofy made-up words: they reinforce the sense that even language has warped in the duo’s E-Z Bake Oven of a brain. It’s the backbone of their overarching — yep, I’m sayin’ it — comedic genius.

In Atlanta, Adult Swim Producer Mike Lazzo proudly called B$M “unreviewable.” He was referring in part to the movie’s relentless triple-dare shock value — crude dialogue, gross bodily functions, graphic anatomy jokes, sometimes all three (and worse) at the same time. But that also says something about its construction and execution: It cannot be broken down. As ramshackle as it strives to be, it’s exactly the movie Tim and Eric mapped out in their heads. It’s even Lynchian when the mood strikes. Our culture is studded with weird lost stuff that’s even weirder out of its familiar context — stuff that gives off a whiff of oblivion. To Tim and Eric, whether it makes you laugh or cringe, you’re better off facing that the landfill is where everything is going to end up. Good artists are noticers — and nothing gets past these guys.