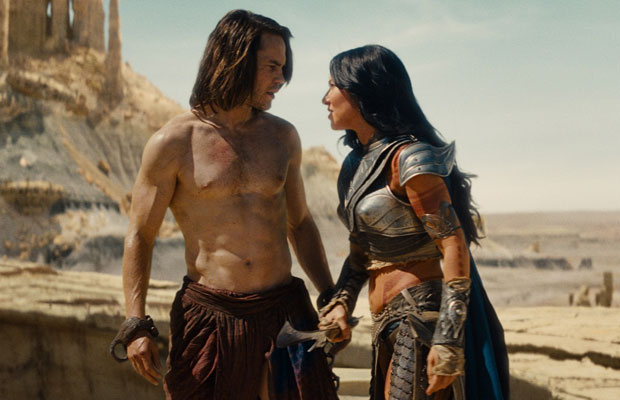 The Walt Disney Co. on Monday acknowledged in a statement that the movie’s poor performance at the box office likely will force Disney to take a $200 million writedown. The company expects its studio divison will post an operating loss of as much as $120 million in the second fiscal quarter of this year.

“John Carter,” based on an Edgar Rice Burroughs character, was made for about a quarter-billion dollars;marketing costs were another $100 million on top of that. But the movie grossed only $30.2 million domestically during its first weekend of release, taking in a measly $13.5 million its second.

The picture was brighter overseas, grossing around $126 million abroad in the 10 days since its March 9 release.

“In light of the theatrical performance of John Carter ($184 million global box office), we expect the film to generate an operating loss of approximately $200 million during our second fiscal quarter ending March 31,” the company said in a statement. “As a result, our current expectation is that the studio segment will have an operating loss of between $80 and $120 million for the second quarter.”

The writedown means “John Carter” is one of history’s biggest flops.

Even before “John Carter” arrived in theaters, Hollywood had labeled it a bomb. Early on, there were wide reports that the sci-fi extravaganza had gone over budget and required many costly reshoots. An uninspired trailer only made the situation worse.

“John Carter” stars Taylor Kitsch as a Confederate soldier who finds himself transported to Mars, where he becomes involved in an alien war. The movie had long been in development with several filmmakers deeming it unfilmmable before Stanton got the project.

Taking the hit, the studio pointed to upcoming movies with presumably happier fates in store.

“As we look forward to the second half of the year, we are excited about the upcoming releases of ‘The Avengers’ and ‘Brave,’ which we believe have tremendous potential to drive value for the Studio and the rest of the company,” Disney said.