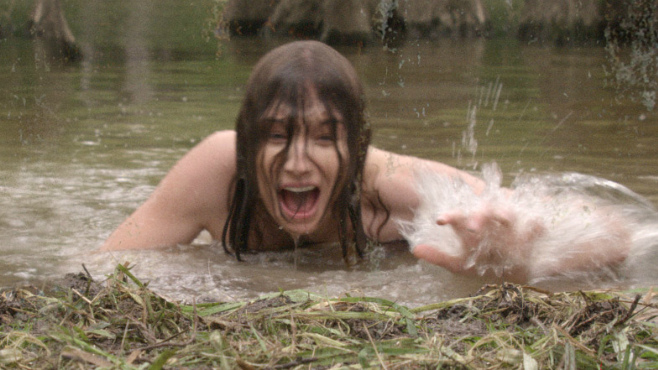 Straddling the thick line between SyFy Channel Original Movie and theatrical release quality comes Creature, a film perhaps best described as “the typical redneck cultist half-man/half-alligator movie.” Oh sure, it sounds kind of unique on paper (if “kind of unique” is even possible), but the film plays out like a myriad other straight to video schlock films, filled with cliché, archetypes and muted gore. For a straight to video release, Creature would be likely to turn heads as a comparatively smart, nicely produced and rather enjoyable B-movie entertainment. Unfortunately, Creature was released in theaters, a location which ratchets standards up a few notches and making Creature pale by comparison to bigger productions. It’s heartening that someone had this much confidence in a low-budget monster movie, but that faith is wholly misplaced.

This events of Creature begin as all straight to video horror movies must, with a group of attractive young people on a road trip. A trio of young Marines, just out of the service, are motoring through the backwoods of the American South with two girlfriends and a sister, who acts a lot like a girlfriend. This actress’s name is Jennifer Schneider, and aside from known B-movie quantities like Sig Haig and Pruitt Taylor Vince, she’s the only cast member to make a lasting impression with a fun, sexy performance that revels in her character’s likeable sleaziness. Along the way these kids run into a roadside attraction run by Haig, playing up a local legend of an inbred hillbilly who turned into half-man/half-alligator creature and now supposedly scours the swamps in search of blood and brides. In the grand old horror movie tradition, the time has come to say, “Let’s check it out!”

I have decided, in my travels, to never, ever check anything out. I’m struggling to think of a single occasion in which “Let’s check it out” led to anything positive, like nubile orgies or even the best bagel stand in town. It usually leads to the situation we find in Creature, where a group of youngsters find themselves isolated in an unforgiving terrain, beset on all sides by hicks who want to present their monster god with fertile young lasses to impregnate. But while in real life I’d probably have no interest in playing along with this sort of behavior, in motion picture form Creature presents the scenario with humor and some creativity, and a lot more incest that you’re probably used to outside of “Game of Thrones.”

That level of, as director Fred Andrews calls it, “ookiness” lends Creature a more distinctive feel than most of its genre brethren, which shy away from actual ideas in favor of genre mashups and high concept titles like Mansquito. Andrews’ film revels in its playful presentation of cultish backwoods shenanigans, although it fails to properly explain what the hell is going on. By the film’s quasi-twist ending, we’ve figured out basically what Haig & Co. were up to, but their motivations are so vague and unexplored throughout most of the running time that we’re forced to fall back on familiar conventions of running through the woods, calling out girlfriends’ names and fighting a guy in a big rubber suit. All those elements are capably presented but so by the numbers that you’d think they were plotted out on an abacus. It’s the film’s ookiness that makes Creature stand out. It even dares to make the prevailing incestuous subplots play off as a little sexy sometimes. Gross, certainly, but you have to applaud a horror movie for actually playing off audience discomfort rather than rely on cheap “Boo” scares all the time.

Although Creature slightly raises the bar for straight to video entertainment (and pretty much lowers it for theatrical releases), there’s no denying that the DVD-only release, available this week, is something of a disappointment. The transfer highlights the film’s glowing, unrealistic greens and offers a fair amount of detail, but the special features are non-existent, which is a shame considering that Andrews has a gorier director’s cut out there somewhere, and probably could have provided an intriguing commentary track about the movie’s curious obsessions. Monster movie fans will find Creature comforting, but casual horror movie enthusiasts will probably find little reason to seek it out.