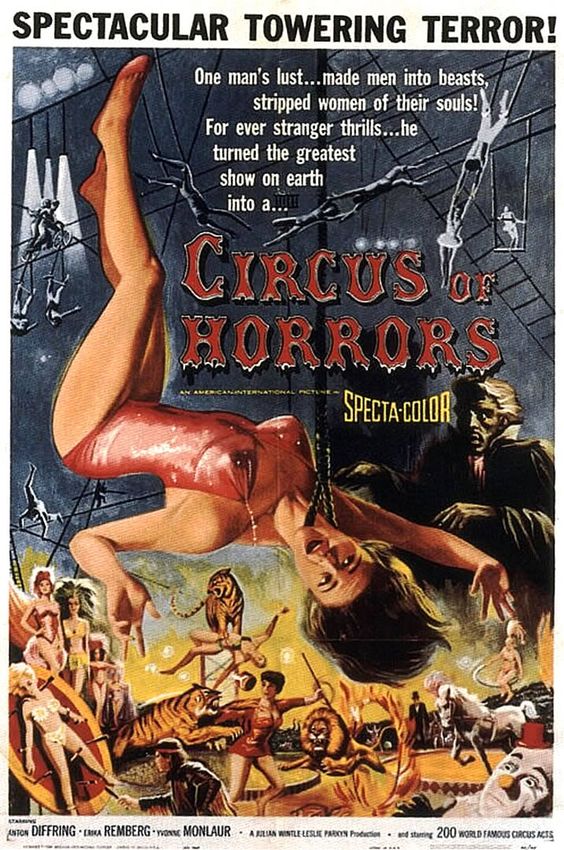 After the fantastic opening sequence in which a young woman smashes all the mirrors in her room before revealing herself to have horrible facial scars, you just know you’re in for a treat, and this movie certainly doesn’t disappoint!

The story follows Doctor Rossiter, a plastic surgeon that finds he has to flee England after an operation on a young woman went horribly wrong. He then goes to, as the film says, ‘somewhere in France’, where, after certain events transpire, he becomes the owner of a French circus. He uses this circus as a cover so he can use his anxious hands to operate on disfigured women so he can put them into his circus show as beautiful performers. He dubs the circus “the circus of beauty”, but after several of his performers die in horrible “accidents”, it later becomes the “The Jinx Circus”, and attracts attention from the local police authorities…

Anton Diffring looks suitably evil as the plastic surgeon that uses his skills to change the faces of women with scars to make them beautiful performers in his circus. His character is portrayed as being malevolent and inhumane throughout the film, as all he cares for is himself and his work, which is shown best by the way he treats the love given to him by his associate’s sister, which makes it hard for the audience to feel anything at all for him. Even when he displays human emotion by falling in love with one of patients, his character is still shown in a bad light and we are still made to hate him. This, however, is a definite asset to the movie as it makes the audience feel contempt for the man, and that pays off immensely towards the ending, which is rich with poetic justice. Had the character have had a prevalent human element, this ending would not have worked nearly as well.

The plotting throughout the film is thrilling and suspenseful, certain scenes in particular such as the sequence where the young girl has her bandages removed and the knife throwing scenes are positively nail biting. The film captures the imagination and keeps the viewer fully entertained throughout it’s running time without getting boring for a second. The film also manages to do a thing that few films really manage, and that is that it’s actually quite horrifying. The scars shown on the faces of his victims are horrible, but only horrible enough so they’re still believable. Had the film gone over the top in the make up department, it could have lead to the scars looking silly and therefore unbelievable, but it’s all spot on. One of my favourite things about this movie is the act done by the ‘death defying woman of the air’, Elissa Caro; the act in itself is impressive, but when blended with a pop song and cheers from the audience it gives it a haunting and atmospheric feel and the outcome of that is really quite beautiful.