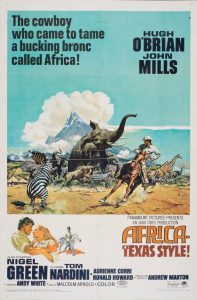 Africa: Texas Style finds Hugh O’Brian and Tom Nardini over in Africa after the rodeo season has finished. They are there at the request of John Mills who has an idea to give up cattle ranching in Kenya and go in for domesticating the native animals there. Though they eventually might wind up food on humankind’s dinner plate, the species will be preserved. Mills sees this as the best way to satisfy both his needs and the survival of some Africa’s game animals. There are a lot of points of view expressed here.

One of those is that of fellow rancher Nigel Green who raises cattle and is not looking to go into a new business. Curiously enough Mills accuses Green and his cattle of doing exactly what in a few hundred westerns the cattlemen accuse the sheep of doing, leaving the ground barren and eroded.

O’Brian is there for his roping skills and Nardini is his hazer in rodeo events. Roping a wildebeast or a zebra is a whole other proposition.

I’ll leave the zoologists to debate the points of view the film has. For viewers it’s a nice look of Kenya post independence and the acting is just fine. Looks at the Masai tribal culture is also interesting.

This will not rate with The African Queen or King Solomon’s Mines as an African adventure, but it’s pleasant enough.

This also served as a pilot for a short lived TV series where Chuck Connors and Ronald Howard play the roles that O’Brian and Mills do.