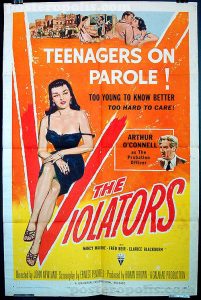 n the Bronx during the Depression, failing lawyer and single father Solomon Baumgarden is urged by his father David to train for one of the many positions available to probation officers. While Solomon’s sister Eva cares for his young daughter Debbie, Solomon takes a job at the civil service office under the tutelage of chief probation officer Anthony Calini. Solomon’s sympathetic attitude toward all of his charges exasperates Calini, who has grown jaded over his years in the office and prefers to speed the cases through the system. One day, Solomon visits the parents of jailed teenager Sharon Riley to ask for them to help with her release, but Mr. Riley calls Sharon “wicked” and refuses to allow her to live with them. Against Calini’s orders, Solomon visits Sharon again in jail, where she recounts her story: After years of her father’s abusive derision, she escapes one night to the house where her friend is baby-sitting. They are joined by two drunken boys who spill alcohol on the rug and then, in an attempt to conceal their mess, mess up the house to make it appear as if there has been a break-in. All four are arrested, and Sharon now pleads to Solomon to help her avoid jail. Although Solomon writes a compassionate report, Judge McKenna denounces it as subjective. Solomon is furious until Sharon arrives at his office to reveal that the judge has suspended her sentence, and as she hugs him, Calini watches with pride. The years pass, and with the advent of World War II, Solomon’s patience is tested by an ever-increasing number of juvenile delinquents. Due to his busy schedule, he misses Debbie’s high-school graduation, at which she is named valedictorian. Although she is disappointed, she listens to his stories about yet another violated child, abused at home and by the system. The next day, he watches helplessly as a man is convicted of rape, even though his alleged victim has revealed to Solomon that he merely tried to shelter her when she was homeless. Months later, on the night before Christmas, Calini informs Solomon that he has been promoted to chief probation officer, and asks him to promise not to become as jaded as he has. Suddenly realizing that he must buy a present for Debbie, who is now seventeen, Solomon races to the store, where an amused saleslady helps the embarrassed father pick out a nightgown. At home, Debbie prepares for her date with boyfriend Jimmy Coogan, who has returned from the war to find that there are few jobs available. Solomon sympathizes that the boys who were once war heroes are now left to struggle, and, discerning that Jimmy cannot afford a present for Debbie, offers him a bracelet to give to her. Jimmy insists on repaying him, but then asks for a loan of $500, explaining that he wants to start a business selling kitchen equipment. Solomon, who distrusts Jimmy’s sketchy details about the deal, refuses. Later, at a party at his sister’s house, Jimmy confesses to Debbie that he needs the $500 to save his father’s failing business. He presses his brother-in-law, Sam Casey, for a business loan, finally convincing him to take the risk. Jimmy gives the money to his father, then grows anxious about how he will repay Sam. Soon after, however, Sam’s friend Ray asks to be involved in the deal, and Jimmy gives Ray’s investment money to Sam. Sam is so pleased with his “interest” payment that he lines up more financiers for Jimmy’s scheme, and within months Jimmy has borrowed money from most of the businessmen in town. One day, Debbie brings Solomon to Jimmy’s fancy office, where Solomon notices that the file drawers are empty. Later, he questions Debbie about her involvement in the investments, counseling her that if Jimmy’s business is a sham, she could be considered an accessory. She accuses him of wanting to keep her at home to himself, after which he slaps her and she runs out of the apartment. When Jimmy arrives, he finds Debbie on the roof, and soothes her tears by proposing to her. After they return to the apartment, Sam calls, demanding to see the books for Jimmy’s business. Jimmy abruptly ends the call, then asks Solomon’s permission to marry Debbie, but Solomon has overheard the phone conversation and insists on examining Jimmy’s account books. After Solomon calls Jimmy a liar, Jimmy and Debbie storm out together. When two days go by with no word from Debbie, Solomon grows anxious. At work, he snaps at an idealistic young employee, stating that the young cannot be trusted. Sam then arrives to inform him that Jimmy’s scam has been exposed, and offers to forgo pressing charges against Debbie if Solomon will repay the $5,000 that Sam has invested in Jimmy’s business. Solomon throws Sam out, but then breaks down in tears. Moments later, Debbie appears and falls into her father’s arms, sobbing. She explains that Jimmy, wanting only to help his father, used all the money he obtained to pay off other investors, with interest, and now has nothing. Solomon vows to prosecute him, but Debbie heatedly points out that he taught her that everyone deserves a second chance, and begs him for help. Realizing that this will be the most important case of his life, Solomon picks up the phone to begin his work.