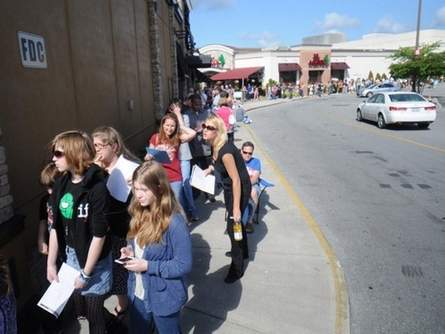 For one Wilmington couple, the choice to dump a couple of pillows, a blanket and a hula-hoop onto the sidewalk in front of Wilmington’s Independence Mall at about midnight Friday was an obvious one. “We wanted to be the first ones and we were,” Lindsey Yow, 23, said after a successful meeting with “Caged Heat” extras casting agents. “It’s been a blast.”

Yow, who wore a Marvel “Avengers” T-shirt, and her husband, Roderick, 22, who sported pinstripe slacks and red suspenders, were among thousands of people who attended the casting call Saturday at the mall for “Caged Heat,” a title known widely as the code name for Wilmington production “Iron Man 3.”

The couple, who set up camp with snacks, a few friends and a hula-hoop – for entertainment – were the first to be seen by agents with the Tona Dahlquist Casting company when the mall’s doors opened at 10 a.m.

Lindsey Yow, who doesn’t have a full-time job but has worked as an extra on such recent productions as “Heart of the Country” and “The Occult,” isn’t concerned about how big or small a part she receives; as long as she gets one.

“I brought my acting resume with all my experience, so hopefully that will help,” she said. “Every production has been good to work for. We love ‘Iron Man,’ so it would be really exciting to be a part of it.”

Casting agents commended the couple for the dedication, she said.

“They seemed to admire the fact that we were here so early,” her friend, Zach Curry, 22, added.

The casting agent estimated that she and others had collected about 1,000 applications by noon. A security guard counted about 800 people in line at 8:30 a.m.