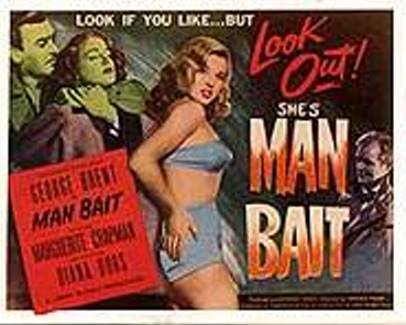 Man Bait is an engrossing, low-budget British film noir that represents an early Hammer Films production in the years before the studio turned to producing their legendary line of horror movies. Several soon-to-be-big Hammer icons worked on the production: it was directed by Terence Fisher, Michael Carreras was the casting director and Jimmy Sangster was assistant director. The claustrophobic drama takes place mostly inside offices and homes with only a few sequences shot outdoors. Perhaps because the producers thought the movie needed some Hollywood gloss, the leading roles went to George Brent and Marguerite Chapman, though both Yanks are overshadowed by a far more intriguing cast of British thespians. Brent plays John Harman, the prim and proper manager of an upscale London antiquarian book shop. He’s happily married to an invalid wife with whom he is anxiously looking forward to traveling with on an exotic cruise. His staid, predictable existence is about to be shaken to its foundations by in an unlikely way. Harman employs a number of people at the book shop, including Ruby Bruce (Diana Dors), a somewhat wayward but vivacious teenage girl. When she falls under the influence of a local cad and thief, Jeffrey Hart (Peter Reynolds), she attempts to seduce Harman as part of a scheme orchestrated by her new lover. The awkward attempt never gets beyond a rather chaste kiss, but Harman soon learns that it has opened the door to a blackmail plot that will have dire and unpredictable consequences, including the unintended deaths of two people. Soon, Harman finds himself under police investigation as a suspected murderer.

The film was deceivingly marketed in the United States as Diana Dors’ first movie, when, in fact, she had been making films for years. The ad campaign also played up the word “Stacked!” next to a photo of Dors clad in a bikini top. Sadly, the famous femme fatale of British cinema is dressed rather demurely throughout the film, save for a slightly sexy off-the-shoulder number she uses in the seduction sequence. However, the attempt to market this film as a cheap sexploitation movie undermines its merits. It’s a thoroughly engrossing story, well-directed and smartly paced throughout its 78 minute running time. Dors would go on to be known as a British Jayne Mansfield, rarely getting a role that stretched any dramatic talents she may have had. (She died in 1984 at age 52). Yet, her performance in Man Bait is impressive and indicated there was real talent that could have been exploited, had producers ever looked above her bust line. The primary weakness is the presence of George Brent in the lead. He’s stiff and boring and his performance is at odds with the far more natural acting styles of the excellent supporting cast (Peter Reynolds is exceptionally good as Dors’ manipulative older lover).

VCI has released the film as a burn-to-order DVD with a first-rate transfer that accentuates the atmospheric camerawork of Walter Harvey.