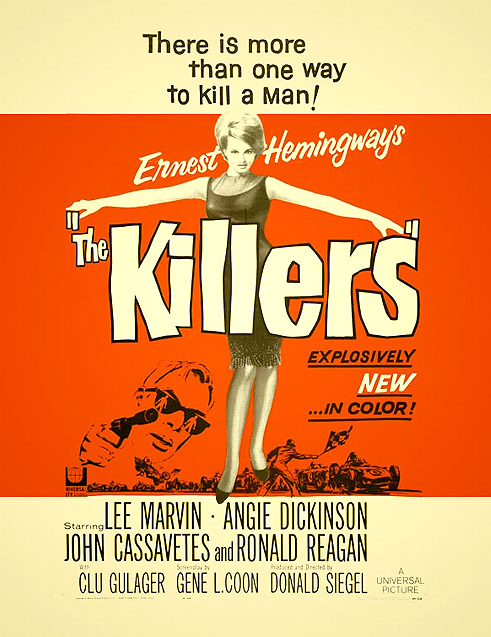 This remake of the classic film with the same name (1946) by Robert Siodmak deals with two hired killers (Lee Marvin , Clu Gulager in similar role to William Conrad and Charles McGraw) who murder a man (John Cassavetes replacing Burt Lancaster) at a blind school . The cold-bloody assassins look into his past and by means flashbacks , attempting to solve leads as to why their victim calmly waits for his death and find tracks to a 100.000 dollars robbery . The gunmen discovering his involvement with crime boss (Ronald Reagan , alike role Alfred Dekkker ) and the gangster’s moll (Angie Dickinson in the character of Ava Gardner).

This noir film packs action , thrills, suspense, tension , thundering drama and a mighty punch in some exciting scenes . It’s loosely based very vaguely on a short story by Ernest Hemingway and originally pretended for television but exhibited to the cinemas due a its lots of violence . This thrilling story with intricate argument plenty of turns and twists , revolves around two assassins revealing surprise after surprise . Noteworthy portrayals come from menacing Ronald Reagan as a racketeer in his last movie, and of course Lee Marvin and Clu Gulager give towering performances as the gunfighters . There’s also a magnificent action from John Cassavetes in the pivotal role and Angie Dickinson as gorgeous Femme Fatale and shooting to stardom in one of his first films . Atmospheric musical score by John Williams , subsequently famous as composer of Steven Spielberg films . Rating : Better than average . It’s a good film that ensures the nervous intrigue never lets up from the first moment and realized in efficient style by Donald Siegel , then at the peak of his Hollywood career and future author of Charly Varrick, Coogan’s bluff and Dirty Harry and sequels. Well worth watching .