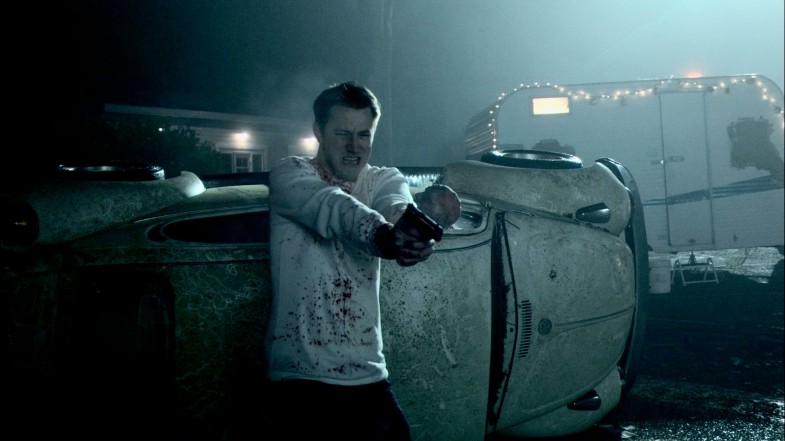 An idyllic island town is under attack by that most invasive of pests: zombies! Port Gamble is being overrun with braineaters, and the people seem powerless to stave them off. But wait, a rag tag band of rebels is trying to turn the tide and push the invading hoards of undead back. It sounds familiar, sure, but this time stereotypes are on parade (and parody) in a retake on the zombie thriller. We have the full compliment of cinematic shorthand, including the closeted small town boy who has gone to the city and returns with his pushy boyfriend in tow; the angry, hard-working, heavy-accented, immigrant from a Muslim country who is overprotective of his beautiful daughter; the hippie peacenik environmentalist; the fire and brimstone reverend who hates everything you’d expect him to, and many more. Enter the zombies. Gore abounds (really abounds) and the current events-based hits keep coming. Gore abounds (really abounds) and the current events-based hits keep coming in this send-up of zombie movie clichés where no subculture escapes unscathed. –Minneapolis-St. Paul International Film Festival

The zombies are as traditional as can be: slow, lumbering, instinctively and relentlessly hungry. They stumble about, decorated in the undead war paint of bloody gashes, torn limbs, and rent flesh, as they take big bloody bites out of the hapless human snacks that populate the ever-shrinking pool of the living. It’s the heroes who are different in ZMD: Zombies of Mass Destruction: an Iranian-American college girl and a young gay man who has yet to come out to his mother. And then there’s the setting: Port Gamble, Kitsap’s picture-perfect mill town. Beneath the surface calm of white picket fences and tree-lined streets are roiling forces of religious hysteria, anti-Islamic paranoia, homophobia, and patriotic rhetoric. All of it is played for big, bright, bloody laughs. It’s political satire meets gory horror farce, Night of the Living Dead as a 21st-century neocon comedy, in which a zombie plague is interpreted as a terrorist attack or the End of Days. Maybe both. It’s not a subtle film, but with blood spattering, limbs flying, and dozens of gray-faced undead chewing human flesh, subtlety isn’t the point. ZMD is instead a midnight movie that ridicules intolerance and nationalist arrogance. That’s exactly where local filmmaker Kevin Hamedani, a recent UW grad, wanted to take the film. “I’m Iranian-American,” he explains. “I never really thought of myself that way, but after 9/11, that sort of changed.” His friendly neighbors up in Edmonds eyed him with a new suspicion, he says. But his epiphany came while flying in the weeks after 9/11. “I remember sitting there on the airplane and looking at every Middle Eastern–looking passenger, thinking ‘What’s in that suitcase?’ And then I went to the restroom and looked in the mirror.” It inspired him to write a script, first as a serious drama. Then Hamedani, a lifelong horror-movie fan, reworked it through the fertile ground of zombie cinema, with echoes of George Romero, Sam Raimi, and Stephen Colbert’s right-wing spoofery. “I think what sold me was the title,” confesses John Sinno, the Seattle producer of James Longley’s Oscar-nominated 2006 documentary Iraq in Fragments. Hamedani contacted Sinno to help raise funds for what he essentially saw as a underground film. He ended up with a producer, one who also understood zombie-movie tradition. “It’s one of the most political genres we have,” says Sinno, “because you have a system that’s breaking down. And when the system breaks down, you have a look at the underpinnings.”
In other words: Zombie cinema is political cinema, ever since George Romero’s transgressive 1968 masterpiece Night of the Living Dead dropped the violence of Vietnam into the heartland of America, where strains of race, class, and social upheaval mixed with grotesque horror. Unthinking, blindly voracious zombies have proven a remarkably versatile metaphor. Romero subsequently used them to critique consumer culture (Dawn of the Dead), social inequity and predatory capitalism (Land of the Dead), and the commodification of news in the YouTube era (Diary of the Dead). Other filmmakers have followed suit: The SIFF ’07 favorite Fido made zombies a parable for a McCarthyist alternate history. From England, late capitalism swiftly declined to anarchy in 28 Days Later; then besieged London became a U.S. military–run Green Zone in 28 Weeks Later. Zombies are the tabula rasa of movie monsters, which is exactly how Hamedani uses them in ZMD. He recalls, “I just watched Romero’s films and realized: obviously. Instead of an African-American guy in Night of the Living Dead, I’ll have a Middle Eastern girl.” Like Romero, Hamedani never explains the cause of the zombie infection tearing through Port Gamble. The locals simply fill the information vacuum with their worst fears. The zombie crisis becomes an “I told you so” scenario, an excuse to impose their idea of moral order on outsiders who don’t conform. In ZMD, one fervid neocon deputizes himself to detain and torture our Iranian-American heroine (UW-trained actress Janette Armand), suspecting her to be a terrorist. “Some of us have to give up our rights to remain safe,” he tells her. By “some,” of course, he means her. Meanwhile, a conservative pastor views the zombie invasion as a biblical Armageddon in which only sinners are at risk. His idea of heroism is an emergency intervention to “cure” the two gay men seeking sanctuary in his church. “Have no fear,” he preaches with renewed passion, “for we have history’s greatest zombie on our side: Jesus Christ!” Again, ZMD doesn’t aim to be subtle. I don’t want to try to pass it off as a cult masterpiece, but it’s bloody good fun—a spirited political farce with its politics in the right (meaning left) place. It’s perfect for Seattle, even better for a late-night SIFF crowd. (Advance tickets for the first of two screenings are sold out.) “This is a South Park–generation film,” says Sinno of ZMD. “It’s timely, in-your-face humor, kind of crude in many ways, but it doesn’t take itself seriously.” And in the best tradition of zombie movies, it delivers the gory goods.