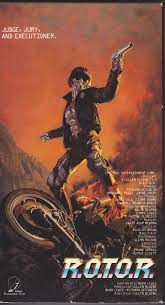 To begin with, Richard Gesswein is the worst leading man ever to grace the silver screen. They had to get someone to pull a voice-over for his role, Coldyron (Yeah, that’s a tough name), as well as his leading lady, Dr. Steele’s part. Dr. Steele, by the way, is a bodybuilder woman with a skunk on her head.

The opening scene reveals the end of the movie immediately telling you that you are wasting an hour and a half. These three guys (the director, writer and star) came up with enough money to take RoboCop, The Terminator, and Judge Dredd (which was merely in comic book form at the time) into one completely awful masterpiece.

When we go back to the beginning of the story, the clock strikes 5:00 and Coldyron wakes up. Just as a quick note to the viewers, the filmmakers then had the clock read 4:50, as if to say, “Please, it’s not too late for you, turn off the TV and RUN!” Of course, I didn’t follow the directions, I just laughed. Shortly thereafter he fills up a cup of coffee with far too much sugar and you’re thinking, “Wow, he sure likes sugar.” (This is a joke that you will soon be hoping the filmmakers didn’t find to be funny). He grabs carrots from the fridge and heads outside, to his horse. You think the carrots are for the horse, right? But he gives the horse the coffee! THAT’S why there was so much sugar! Then HE eats the carrots himself! AHA! SO FUNNY!! This is about how great the entire movie is.

Absolutely nothing makes sense in this movie. Gesswein says that ROTOR will be ready in 25 years, then says he needs at least 4. Shortly thereafter a Native American character named Shoeboogie puts his headphones in the wrong place and sparks ROTOR. It just makes no sense at all.