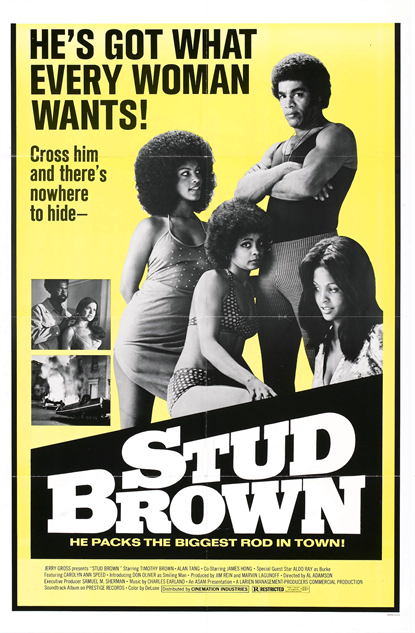 Al Adamson was one of the first US directors to use a Hong Kong Stunt team in America. He was a trendsetter for once. The Dynamite Brothers is a real low budget film that has a sleazy feel to it. Alan Tang (former 70’s Golden Harvest matinee kung-fu star) stars as a F.O.T.B. chinese looking for his long lost brother. But trouble awaits for him as he “leaps” off the boat. A group of martial Artist led by “MR. Vampire” Ching-Ying Lam attack him on the docks. After dispatching his opponents, Alan heads off to find his brother. He eventually crosses pathes with Stud Brown and the two become the Defiant Ones. What keeps this movie from being great is the bad directing by Al Adamson and his lousy cameraman. They obviously don’t know how to film or correctally frame a fight scene. This is sad becuase the action scenes (directed by Ching-Ying Lam) are remarkable. A lot of familiar faces pop up uncredited such as future Sammo Hung Stunt team Members Peter Chan Lung, Philip Ko and Mars can be seen in the back ground. If there was a budget, Al Adamson must have spent it on flying these guys out to California. Besides the cheap feel to the movie, it’s not that bad. I enjoyed very much. Alan Tang only got the lead becuase he’s the only one that can speak english fluently, Ching-Ying Lam didn’t know how to speak english and the others spoke very little. After watching Alan Tang in action, you’ll be wanting to watch his older, H.K. work. He’s one bad dude. Recommended for historical purposes.